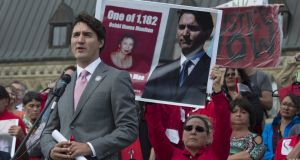 The document, titled Reclaiming Power and Place, was compiled over more than two and a half years. Canada’s CBC News was given a copy of the report, which is due to be released on Monday, on Friday. Its contents were confirmed to the Guardian by an individual working within the inquiry.

The report, by the National Inquiry into Murdered and Missing Indigenous Women and Girls, determined that “state actions and inactions rooted in colonialism and colonial ideologies” were a key driving force in the disappearance of thousands of Indigenous women.

“We do know that thousands of Indigenous women, girls and 2SLGBTQQIA (two-spirit, lesbian, gay, bisexual, transgendered, queer, questioning, intersex and asexual) people have been lost to the Canadian genocide to date,” said the report.

While the number of Indigenous women who have gone missing is estimated to exceed 4,000, the report admits that no firm numbers can ever be established.

For years, activists and Indigenous peoples have pushed for a government inquiry into the high number of Indigenous women who have either gone missing or been killed. The previous Conservative government rejected the idea of an inquiry, but prime minister Justin Trudeau’s Liberals ran on the campaign promise of directing state efforts to determine the scope and extent of the disappearances. There are 230 recommendations in the report, according to the CBC.

The report’s authors admit that it is difficult to fashion a universally accepted definition of genocide. Instead, the report relies on the work by legal experts and Indigenous scholars to draw the conclusion of genocide within the country.

“Genocide is the sum of the social practices, assumptions, and actions detailed within this report,” said the report. “The national inquiry’s findings support characterising these acts, including violence against Indigenous women, girls, and 2SLGBTQQIA people, as genocide.”

This is not the first time a government report has invoked accusations of genocide in the country.

In 2015, senator Murray Sinclair, who led the Truth and Reconciliation commission, experienced an intense backlash after he called the school policy in which thousands of Indigenous children were incarcerated in residential schools “cultural genocide” – a characterisation supported by the former chief justice of the supreme court, Beverly McLachlin.

In order to produce the report on the murdered Indigenous women, the inquiry held 24 hearings across the country. At least 2,380 people attended, including the family members of those who had been killed or gone missing. Further testimony came from elders, academics and government officials.

The prime minister and senior cabinet officials – as well as Indigenous leaders and the families of victims – are expected to attend the release of the report on Monday at the Museum of History in Gatineau, Quebec. – Guardian