Tariff will increase ‘until illegal immigration problem is remedied’, US president says 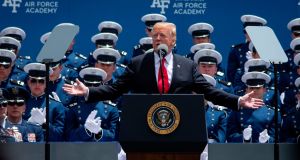 US president Donald Trump has announced he is slapping a 5 per cent tariff on all Mexican imports to pressure the country to do more to crack down on the surge of Central American migrants trying to cross the US border.

He said the percentage will gradually increase – up to 25 per cent – “until the illegal immigration problem is remedied”.

The decision showed the US administration going to new lengths to pressure Mexico to take action – even if those risk upending other policy priorities, such as the United States-Mexico-Canada Agreement (USMCA), a trade deal that is the cornerstone of Mr Trump’s legislative agenda and beneficial to his re-election effort.

Mr Trump made the announcement by tweet after telling reporters earlier on Thursday that he was planning “a major statement” that would be his “biggest” so far on the border.

“On June 10th, the United States will impose a 5% Tariff on all goods coming into our Country from Mexico, until such time as illegal migrants coming through Mexico, and into our Country, STOP. The Tariff will gradually increase until the Illegal Immigration problem is remedied,” he wrote.

Mr Trump has accused the Mexican government of failing to do enough to halt the flow of asylum-seekers from countries including El Salvador, Honduras and Guatemala.

But the sudden tariff threat comes at a peculiar time, given how hard the administration has been pushing for passage of the USMCA, which would update the North American Free Trade Agreement.

It comes less than two weeks after Mr Trump lifted import taxes on Mexican and Canadian steel and aluminium, a move that seemed to clear an obstacle to passage of his North American trade deal, and the same day that both the Mexican government and the Trump administration began the process of seeking ratification.

The deal needs approval from politicians in all three countries for it to be ratified.

Mr Lopez Obrador said late on Thursday in a public letter addressed to Mr Trump that “social problems are not solved with duties or coercive measures,” and alluded to the United States’ history as a nation of immigrants: “The Statue of Liberty is not an empty symbol.”

Mr Lopez Obrador wrote that Mexico is doing its part to avoid migration through its territory as much as possible, without violating human rights.

The Mexican leader also urged Mr Trump to “please, remember that I do not lack valour, that I am not a coward nor timorous but rather act according to principles”.

In late March, Mr Trump threatened to shut the entire US-Mexico border if Mexico did not immediately halt illegal immigration.

Just a few days later, however, he backed off the threat, saying he was pleased with steps Mexico had taken in recent days. It was unclear, however, what Mexico had changed.

Indeed, on a briefing call with reporters on Thursday evening, administration officials said there were several things Mexico could do immediately to prevent the tariffs from kicking in, including securing their southern border with Guatemala and entering into a “safe third country agreement” that would make it difficult for those who enter Mexico from other countries to claim asylum in the US.

“We’re going to judge success here by the number of people crossing the border and that number needs to start coming down immediately, in a significant and substantial number,” said acting White House chief of staff Mick Mulvaney.

He also insisted that tariffs were “completely” separate “and apart from the USMCA” because one pertained to trade and the other immigration.

“The two are absolutely not linked,” he said.

The White House laid out an escalating schedule of tariff increases if Mr Trump’s demands are not met.

“If the illegal migration crisis is alleviated through effective actions taken by Mexico, to be determined in our sole discretion and judgment, the Tariffs will be removed,” the White House said in a statement.

“Tariffs will permanently remain at the 25 per cent level unless and until Mexico substantially stops the illegal inflow of aliens coming through its territory,” the statement read. –AP