As economic jitters hit US, will Trump shake hands with China?

America Letter: The trade war with China has been damaging. A softening may be near 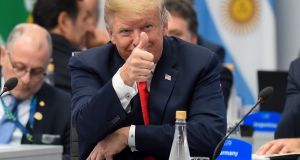 There have been reports that US president Donald Trump is concerned about a possible economic slowdown. Photograph: Saul Loeb/AFP/Getty Images

Donald Trump was given a brief reprieve from the Mueller investigation as he flew to Argentina this weekend for the G20 summit.

On Friday Mr Trump stood side by side with Canadian leader Justin Trudeau and outgoing Mexican president Enrique Peña Nieto as they signed the new North American trade agreement. A revamped version of Nafta – the much-maligned North American Free Trade Agreement lambasted by Trump on the campaign trail – has been replaced by USMCA (United States–Mexico–Canada Agreement) following months of negotiations.

Despite the smiles and photographs as the three leaders took part in the signing ceremony, the process has been far from harmonious. Canada, in particular, is unhappy with concessions it made in the dairy sector.

That Trump was keen to present it as a victory to his supporters was not surprising. The US president badly needs a win on the economic front. Signs of unease have begun to ripple through the American economy, in part due to the Trump administration’s trade policy.

On Monday, General Motors announced plans to close five factories in North America and cut 14,000 jobs – a major blow to workers in some of the rust-belt states that helped carry Trump to victory in 2016. Trump has said he is considering imposing tariffs on imported cars as a result, arguing that a 25 per cent tariff on small truck imports has helped support the American industry.

Farmers in wide swathes of rural America are suffering from retaliatory tariffs imposed by the US’s trading partners in response to Trump’s steel and aluminium tariffs, impacting soybean farmers in particular.

The US’s economic jitters are not just confined to trade matters. In recent weeks the booming stock market has suffered sharp falls, prompting speculation that the longest bull run in history could be running out of steam. In particular, the so-called Faangs – Facebook, Apple, Amazon, Netflix and Google – lurked near correction territory, raising questions about the long-term prospects of the mighty tech stocks.

Given that Trump regularly takes delight in the strength of the US stock market – and the fact that savings and retirement funds of millions of Americans depend on it – a market slowdown might be one of the few triggers that could prompt him to change his aggressive trade stance, which analysts believe is contributing to market nerves.

Tensions between the White House and the Federal Reserve also broke into the open this week, following months of criticism from Trump about interest rate policy. “I’m not even a little bit happy with my selection of Jay,” he told the Washington Post in an interview on Thursday, referring to his pick to lead the Fed, Jay Powell.

Amid reports that Trump is concerned about a possible economic slowdown, all eyes will be on his meeting with Chinese leader Xi Jinping on Saturday in Buenos Aires. The leaders of the world’s two largest economies are scheduled to meet for dinner. The effective trade war that began earlier this year between China and the United States is weighing heavy on the global economy.

Art of the deal

Trump has said he is willing to do a deal, but he also warned on the eve of the summit that he was prepared to move ahead with increased tariffs of 25 per cent on $200 billion worth of Chinese goods from January 1st if necessary.

Even proponents of free trade admit that Trump has a point about China’s unfair trade practices.

Its growing dominance in terms not only of manufacturing but also in the fields of technology and innovation is one of main economic trends of modern times, one that is likely to affect the global economic balance of power in coming decades.

Xi’s “Made in China 2025” policy, for example, which seeks to challenge US dominance in semiconductors, worries the US. Although China is unwilling to change its policy, it is nonetheless keen to avoid a deepening trade war – already China’s economy is showing signs of slowing down. Last month its official quarterly growth figure was the lowest in a decade, though still an impressive 6.5 per cent.

What is clear is that China-US trade tensions will affect the global economy as a whole, and probably represents one of the main geopolitical risks to the world’s economic growth.

Amid reports that the two leaders could agree a truce and allow fresh trade negotiations to begin in Washington in December, stock markets rebounded on Friday. Negotiating a fair and transparent trade arrangement between Washington and Beijing is in everyone’s interests.