Fire extinguisher: Two-thirds of Dutch teens would not sleep with a smoker 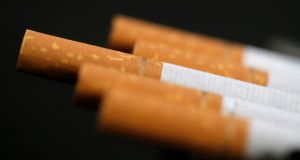 Smoking is finally in the midst of a generational change that means teenagers no longer regard it as cool – and would rather run a mile than have sex with someone who “lights up”, according to a new survey in the Netherlands.

The battle for minds over the dangers of cigarettes has been going on since smoking was at its most glamorous in the 1950s, and the study by I&O Research has been welcomed by Dutch health minister Paul Blokhuis as evidence that “a smoker-free generation is now on the horizon”.

It’s also encouraging news for governments because as well as underlining the huge importance of peer pressure, the survey shows that increasing the cost of smoking has been an effective policy tool in pricing youngsters out of the market.

Just over 1,000 youngsters aged 12-18 participated in the survey, which was carried out on behalf of an anti-smoking lobby group.

The key finding is that smoking simply does not have much traction with this age group any more – with 80 per cent of those surveyed saying it’s “not cool”, and even 41 per cent of young smokers agreeing it’s socially unattractive.

How unattractive? Well, 85 per cent of the teenagers questioned said they would rather not be in a relationship with a smoker, now or ever – while 66 per cent said they would totally rule out ever having sex with anyone who smoked.

That growing peer disapproval is clearly making itself felt, with more than half of young smokers confirming they had had trouble finding boyfriends or girlfriends due to the fact that they smoked – an activity that, they acknowledged, made them “cough and caused yellow teeth”.

At every level, the research showed, maintaining social relationships was more important than smoking and apparently outweighed the power of addiction.

Three-quarters of respondents said they believed that increasing the price of cigarettes – which now cost €8.20 for a packet of 20 in the Netherlands – forced smokers to stop.

And indeed, willingness to stop seemed to be linked to economic pain, with 90 per cent saying they would definitely stop if the cost rose to €15, while 59 per cent would kick the habit at €10.

The grounds of universities and schools will be smoke free from August 1st, and neutral packaging will be introduced in October.