Thousands took to the streets in Hong Kong on Sunday in protest against Beijing’s plan to impose national security laws on the semi-autonomous region. Video: Reuters 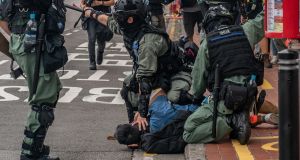 A pro-democracy supporter is detained by riot police during an anti-government rally in Hong Kong on Sunday. Photograph: Anthony Kwan/Getty Images

Hong Kong police have used tear gas, pepper spray and water cannon on crowds after thousands took to the streets in protest against Beijing’s declaration that it intends to impose national security laws on the semi-autonomous region.

At least 120 people were arrested, according to police, mostly for illegal assembly.

The rally and march in the downtown business and shopping districts had not been authorised. In contrast to marches and rallies last year, demonstrators had been visibly tense in anticipation of a harsh police crackdown.

Riot police, armoured vehicles and water cannon were deployed across Hong Kong island including at Beijing’s Liaison Office ahead of the event, and police had warned people not to march, promising to take “resolute law enforcement action as appropriate”. Social media reported numerous police roadblocks, and cars being searched.

The situation quickly escalated on Sunday afternoon after protesters descended on Causeway Bay and Wan Chai in one of the biggest gatherings since the pandemic began, in defiance of social distancing laws.

Shops and buildings quickly shut their doors, and people ran into side streets and pedestrian overpasses before soon returning to Hong Kong’s busiest arterial main road. Groups built makeshift barricades as police chased people through streets, making arrests and rounding up others to search them.

Police, who were controversially cleared earlier this month by the police watchdog of accusations of brutality, repeatedly deployed tear gas, pepper spray, and water cannon.

Hong Kong police said in a statement it was “maintaining law and order at the scene and using the minimum necessary force, including tear gas, to disperse the rioters”, after some assaulted officers and threw hard objects.

Later in the afternoon footage showed protesters using a crowbar to attack a man identified as a solicitor who has given support to the government’s controversial anti-mask law. According to local media the man was hospitalised.

The rally, which was planned last week in relation to another controversial law which would criminalise ridicule of the national anthem, took on a new urgency after the Chinese Communist Party revealed its plans on Thursday at last week’s annual meeting.

The move by China appears to have increased anti-Beijing sentiment in Hong Kong and prompted calls from the protesters for Hong Kong’s complete independence – something absent from their demands so far. Despite accusations by Hong Kong and Chinese authorities of separatism, the pro-democracy movement officially has just five core demands, none of which are independence.

Crowds chanted “Hong Kong independence, only way”, “fight for freedom, stand with Hong Kong”, and “rejuvenate Hong Kong, revolution of our time”. In Causeway Bay they sang “Glory to Hong Kong”, a song that has become an unofficial anthem of the protest movement. Others raised face masks in front of police to say they were attending a health forum and thus not breaching laws.

The Hong Kong government has relaxed many Covid restrictions but maintained limits on public gatherings, prompting accusations this was a tactic to prevent protests.

One 30-year-old protester, who gave her name as Ms Chan, told the Guardian: “Even if there’s a risk of being arrested, I’d still come out, I’ll fight till my last breath.”

“I witnessed several decades of the Chinese Communist party’s misdeeds, I escaped to Hong Kong [from mainland China] 40 years ago,” he said.

“Now they have completely ruined Hong Kong. I am here to protect my home. We’re the real patriots, not the Communist party.”

The decision being considered by Beijing’s National People’s Congress (NPC) would pave the way for a law outlawing acts of subversion, separatism, “acts of foreign interference” and terrorism against the central government, charges that have been used against political dissidents and opponents in mainland China.

It would also allow Beijing to install its own security agencies in Hong Kong.

On Sunday, China’s foreign minister, Wang Yi, said the formulation of the legal framework would begin after the proposed decision is approved by the country’s legislature next week.

“We must get it done without the slightest delay.”

Despite global condemnation, Hong Kong’s leader, Carrie Lam has given support for the NPC bypassing the Hong Kong government to impose the law itself.

Under the Basic Law – the mini-constitution enacted when Hong Kong was handed to China by Britain in 1997 – Hong Kong is obligated to pass national security laws itself. However successive attempts to pass them have failed in the face of community opposition.

The announcement that Beijing would impose the national security laws stunned Hong Kong’s residents, millions of whom marched through the city over the past year to protest against another controversial law, a now-shelved bill that would have allowed extradition to the mainland.

The 1997 agreement handing Hong Kong back from Britain to China promised 50 years of uninterrupted semi-autonomy for Hong Kong under the “one country, two systems” principle.

With its announcement Beijing has been accused of trying to bring 2047 forward to 2020.

Mass protests in 2019, which had begun to rekindle now the city is emerging from pandemic restrictions, have been widely cited by authorities as the catalyst for the increased crackdown.

Since June, more than 8,000 people, including protesters as young as 12 and 15 senior activists and pro-democracy figures, have been arrested over involvement in protests. There is fear that at a minimum, the new laws could be used to increase the charges against them.

The national security laws have been condemned around the world, with the US threatening consequences for mainland China. – Guardian