US Politics: Mueller report is likely to distract the party from what truly matters for 2020 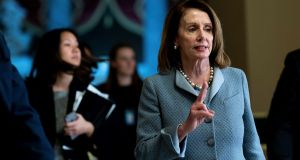 Everyone complains about the weather. Nobody does anything about it. The same applies to the US economy. America shifts restlessly from its first non-white president to an orange-haired nativist. But its fixation on the economy rarely wavers.

Even amid widely shared booms (millennials should ask a grandparent about this), Americans have still wanted more. But as long as growth is occurring, they will tolerate ethical flaws in their commander-in-chief. Decency comes second. Just ask Bill Clinton. Or Donald Trump.

All of which should be top of the agenda of whoever wants to replace Trump next year. A clear-sighted view of the 2016 election would diagnose Trump as a symptom, rather than the cause, of America’s problems. Doctors should not lose sight of the ailment – a system where the politicians do very well both for themselves and their business sponsors. Others see little of that permanent boom. Blaming the problem on Russia is like telling a cancer patient they should suspend treatment to sue the driver who ran over their dog. It misses the point.

It is in Trump’s interests that Washington keeps doing so. Unfortunately for the Democrats, he has all the tools to ensure that. The special counsel Robert Mueller’s report – or the amuse-bouche we have been given – offers Trump only partial absolution. There was no provable conspiracy with Russia. But Mueller left it to others to decide whether Trump is guilty of obstructing justice. That cannot be done without seeing the full report.

These basic facts will ensure Washington remains consumed by the Mueller report for months ahead. The first phase will be dominated by the battle to publish it in full. After that comes the debate on what to do about the other heinous – but criminally non-prosecutable – details Mueller accumulated.

The 2020 election is already in danger of becoming another referendum on Trump’s character. That is unfortunate. Last time the odds seemed to be against him. This time, who knows? The US economy’s health will provide much of the answer. But that is hard to forecast.

It is worth stressing two known unknowns. First, if Mueller could not nail Trump, the Democratic House of Representatives will have a tough time doing so. The special counsel operated a tight unit of America’s finest lawyers with the power to prosecute. The Democratic effort will be split between the chairs of powerful House committees. It will be hard for the speaker, Nancy Pelosi, to marshal these fiefdoms into a single force.

Moreover, the American swing voter will treat anything Democrats do as partisan. For all of Trump’s brickbats, Mueller was still widely viewed as a public servant. Nowadays even Trump agrees with this view.

Second, Democrats have no choice but to try to hold Trump to account. It would be a dereliction of duty not to. They are damned if they do and damned if they don’t. It is a safe bet that the summary of the Mueller report given by William Barr, the attorney general, was skewed in Trump’s favour. Reading the full contents will inject his critics with renewed fury. The longer Trump keeps them waiting, the greater that will be. The more of the report the justice department redacts, the stronger the suspicion of a cover-up.

Trump can play this game in his sleep. He can stoke outrage because he is willing to be outrageous. Democrats can only hope that he overplays his hand. Pardoning Paul Manafort, his multiple convicted former campaign manager, might help. So would opening a criminal investigation into Hillary Clinton or Barack Obama. Both those steps are being urged on Trump by his most fanatical supporters.

Either way, Democrats should act in sorrow rather than anger. Their job is to hold the executive to account, not indulge their personal antipathy. That is easier said than done. But they are fortunate in having Pelosi as their leader. Trump is “just not worth it”, she said when asked whether she would impeach him.

Whenever Democrats waver, Pelosi should remind them of recent US history. The phrase “It’s the economy, stupid” was pasted by James Carville, Clinton’s 1992 election guru, on that campaign’s office walls. Their opponent was George HW Bush. He was one of the most decent figures ever to occupy the Oval Office. But he was unable to match the economic optimism of Clinton.

Even then – in far gentler times – the US voter chose a serial adulterer over an uxorious grandfather. The moral of the story is hard to miss. – Copyright The Financial Times Limited 2019

1 Dublin gangland figures involved in Drogheda feud that killed 17-year-old
2 Murdered and mutilated: Keane Mulready-Woods and the teenagers of gangland
3 Who was murdered teenager Keane Mulready-Woods?
4 Mary Lou has to call for the smelling salts as SF councillor deals a knock-out blow
5 Teenage boys and organised crime gangs: A complicated dynamic
Real news has value SUBSCRIBE