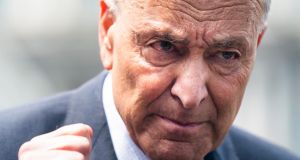 Chuck Schumer speaks to the media after the meeting with Donald Trump at the White House. Photograph: EPA/Jim Lo Scalzo

Democratic leaders said on Tuesday they reached agreement with US president Donald Trump about a $2 trillion (€1.78 trillion) infrastructure plan, though details on how to fund it have yet to be discussed.

In their first White House meeting with Mr Trump since last December’s contentious encounter which led to the longest government shutdown in US history, House of Representatives speaker Nancy Pelosi and Senate minority leader Chuck Schumer said there had been “goodwill” in the meeting.

“This was a very, very good start,” said Mr Schumer as he left the White House. “We hope that it will go to a constructive conclusion.”

The two most senior Democrats in Congress will meet the president again in three weeks to discuss how to fund a package to improve the nation’s roads, bridges and other infrastructure – a conversation that is likely to be more contentious. Nonetheless Ms Pelosi struck a positive tone after the meeting, predicting that the final package would be “big and bold”.

In a statement released after the meeting, White House press secretary Sarah Sanders said the president “looks forward to working together in a bipartisan way and getting things done for the American people”. She described the meeting as “excellent and productive”.

“The United States has not come even close to properly investing in infrastructure for many years, foolishly prioritising the interests of other countries over our own,” she said.

But speaking at an event in California, White House chief of staff Mick Mulvaney sounded sceptical that a deal on infrastructure would be reached with the Democrats. One possible source of disagreement will be the Democrats’ desire to introduce some kind of environmental tax to help fund the infrastructure bill.

An infrastructure plan was one of the big campaign promises of Donald Trump when he ran for the presidency in 2016. But there has been little progress on the matter since his election more than two years ago.

Despite the tensions between the Trump White House and congressional Democrats since Democrats won control of the House of Representatives in November’s midterm elections, Ms Pelosi has been keen to show the party’s willingness to work across the aisle to achieve legislative priorities such as infrastructure and lowering prescription drug costs.

Ms Pelosi and Mr Schumer were accompanied by a dozen Democratic members of Congress at the meeting, while administration officials such as Mr Trump’s daughter, Ivanka, and head of the National Economic Council Larry Kudlow were also present.

Tuesday’s meeting took place against the background of an increasingly bitter battle between House Democrats and the Trump White House to gain access to Mr Trump’s financial and other affairs and to subpoena members of the administration to appear before various committees.

Attorney general William Barr is scheduled to appear before the Senate Judiciary committee on Wednesday. He is also due to testify to a House committee on Thursday but it was unclear if he would do so.

Speaking to reporters after the meeting with Mr Trump, Mr Schumer suggested that the Democrats’ efforts to hold Mr Trump to account did not impact on their discussion with the president. “I believe we can do both at once,” Mr Schumer said. “The two are not mutually exclusive.”

The New York Democrat was speaking after Mr Trump and members of his family sued Deutsche Bank and Capital One in a bid to prevent the banks providing documents about his financial affairs to Congress.