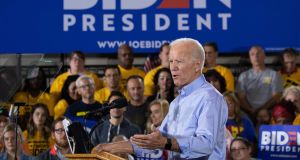 Former US vice-president Joe Biden speaks during his first campaign event as a candidate for US president in Pittsburgh, Pennsylvania. Photograph: Saul Loeb / AFP

Joe Biden pledged to rebuild the American middle class and restore unity to the country as he held his first rally of the 2020 presidential election campaign in Pittsburgh.

The choice of Pittsburgh as the location for his first rally was widely seen as an effort by Mr Biden to appeal to so-called “rust belt” voters who supported Donald Trump in the 2016 election.

Though a senator for Delaware for much of his political career, Mr Biden was born and raised in Scranton, Pennsylvania in the northeast corner of the state, and frequently highlights his connection with blue-collar workers.

Introduced by his wife, Jill, and a teacher from Pittsburgh who stressed the value of hard work and education, much of Mr Biden’s speech focused on the value of work and the importance of unions. “I am a union man,” he told the crowd.

“Let me say this simply and clearly, and I mean this: The country wasn’t built by Wall Street bankers, CEOs and hedge fund managers. It was built by you. It was built by the great American middle class.”

The former vice-president also said that America needed to “redefine what constitutes a successful economy”.

“The stock market is roaring but you don’t feel it. The two trillion dollar tax cut last year, did you feel it? Of course not,” he said. “All of it went to the top,” he added, noting that the number of corporations that paid no taxes had doubled since last year’s tax cut introduced by the Trump administration.

He called for a minimum wage of $15, pledging to reverse Donald Trump’s tax cuts, and abolish capital gains tax loopholes that are exploited by wealthy individuals. “We need to reward work in this country, not just wealth.”

He also mentioned the death of his son Beau, criticising the lack of affordable healthcare for many Americans, though he stopped short of committing to Medicare for All, a policy embraced by other Democrat hopefuls such as Californian senator Kamala Harris.

The former vice-president, who announced his run for the Democratic nomination last week, said he was running for president for three reasons: to restore the soul of the nation; to rebuild the middle class, the backbone of the nation; and to unify the country.

Mr Biden accused president Trump of “abusing the office” of the presidency, denouncing him as the “the only president who has decided not to represent the whole country. We need a president for all Americans.

“We Democrats and we Independents . . . have to choose hope over fear, unity over division and, maybe most importantly, truth over lies.”

Earlier in the day, Mr Biden received an endorsement from the International Association of Firefighters, a union with more than 300,000 members which had a strong presence at the rally.

That endorsement appeared to prompt a tweet from Donald Trump who claimed that union members “love Trump”.

Mr Biden shot back on twitter. “I’m sick of this president badmouthing unions.”