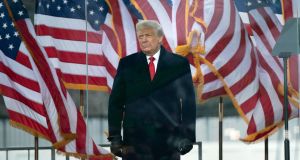 US president Donald Trump arrives to speak to supporters from the Ellipse near the White House on Wednesday in Washington, DC. Photograph: Brendan Smialowski/AFP via Getty Images

Democrats in the US House of Representatives are poised to impeach Donald Trump for a second time for his role in inciting the Capitol Hill riots, as the outgoing president said he would not attend Joe Biden’s inauguration on January 20th.

Though the president’s announcement on Twitter was not unexpected, it will be the first time since 1869 that a president will not attend his successor’s swearing-in ceremony. Mr Biden said it was a “good thing” Mr Trump will not be present, describing it as “one of the few things that he and I have ever agreed on. It’s a good thing him not showing up”.

In a conference call with her party yesterday, House speaker Nancy Pelosi vowed to launch impeachment proceedings if the president does not resign “immediately”. Several Democrats, including Ms Pelosi, have said they would prefer Mr Trump to be removed from office via the 25th amendment to the constitution. But as of Friday there was no indication that vice-president Mike Pence and cabinet members were considering the option.

The House could vote to impeach Mr Trump as early as Monday, accusing him of “incitement of insurrection”, as outrage continues about the storming of the US Capitol by the president’s supporters this week.

Though Mr Trump has just days left in his presidency, it is possible that the Senate could hold an impeachment trial after he has left office.

Only one Republican senator, Mitt Romney, voted to remove Mr Trump in last year’s Senate impeachment trial over allegations he improperly sought help from Ukraine to boost his chances of re-election, and even then the Utah senator only voted for one of the two articles of impeachment.

But Democrats are confident that more Republicans could vote to remove Mr Trump given the events of this week – even if it was just a symbolic move. Republican senator Ben Sasse signalled his willingness to impeach Mr Trump, though South Carolina senator Lindsey Graham opposed it.

Regardless of what happens in the Senate, Mr Trump would become the only president in US history to be impeached twice, if the Democratic-controlled House votes to impeach him as expected. Ms Pelosi also in a phone call asked the chairman of the joint chiefs of staff, Mark Milley, about Mr Trump’s access to the nuclear codes.

Mr Biden refused to be drawn on the impeachment question at a press conference on Friday, though he is thought to be against impeaching Mr Trump again at this late stage in his presidency.

“I’ve thought for a long, long time that President Trump wasn’t fit to hold the job. That’s why I ran,” he said, but added: “What the Congress has to do, it’s for them to decide.”

“If we were six months ago, we should be doing everything we could to get him out,” he said, “but I am focused now on us taking control as president and vice-president on the 20th and to get our agenda moving.”

Nonetheless, the president-elect, who was due to speak by phone to Ms Pelosi later on Friday, is not expected to stand in the way of any moves to impeach the president, a procedure that falls within the remit of Congress.

Asked if senators such as Ted Cruz and Josh Hawley should resign, he said: “I think they should be flat beaten the next time they run. They’re part of the big lie.” He continued: “The acolytes that follow him, like Cruz and others, they are as responsible as he is.”

Meanwhile, federal prosecutors filed charges against at least 15 people in connection with the Capitol Hill riots. These include Richard Barnett, the Trump supporter from Arkansas who was photographed in Ms Pelosi’s office and was arrested on Friday in Little Rock.

Derrick Evans, a Republican member of West Virginia’s legislature, was also arrested by the FBI, after participating in the attack.