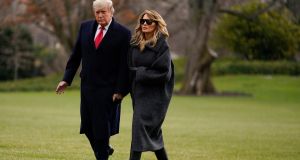 US president Donald Trump and first lady Melania Trump arrive on the South Lawn of the White House in Washington on December 31st. Photograph: Evan Vucci/AP

US president Donald Trump returned to Washington on Thursday, abruptly cutting short a holiday retreat to his private south Florida resort as the president’s allies on Capitol Hill prepare to mount a last-ditch challenge to US president elect Joe Biden’s election victory.

Mr Trump had reportedly been in a stormy mood since his arrival at Mar-a-Lago, where he decamped days before Christmas and was originally expected to remain through the New Year’s Eve celebrations.

It was not clear what triggered the president’s change of plans. He declined to answer questions upon boarding for his flight back to the White House on Thursday morning.

But hours before the White House announced that Mr Trump would spend New Year’s Eve in Washington, the Republican senator Josh Hawley of Missouri announced that he would object to the electoral college result when Congress meets on January 6th to affirm Mr Biden as the winner of November’s presidential election.

Mr Trump had been goading his most loyal backers in Congress to stage a final intervention on the floor of the House to try to overturn the results of the election.

The effort to keep Mr Trump in power is all but destined to fail, but it will test Republicans’ loyalty to the president, who maintains a vice-like grip on their party, even after Americans voted to remove him from office after a single term.

Many Senate Republicans had hoped to avoid such a showdown over the certification process, typically a formality. The move by Mr Hawley, a conservative freshman believed to have presidential ambitions, will force his colleagues to publicly affirm or oppose the election results.

Mr Trump lost several battleground states by clear margins. His volley of lawsuits alleging widespread voter fraud in six states he lost have been almost uniformly dismissed, including by the supreme court.

Officials at local and national level declared it the most secure election in American history, and the electoral college voted earlier this month to certify Mr Biden’s 306-232 win.

And yet Trump has refused to concede, spending his last holiday season as president fuming over his loss.

On Twitter, the president continued to amplify conspiracy theories about voter fraud and lashed out at Republican officials who have refused his demands to overturn his loss in their states.

On Wednesday, he called on the Republican governor of Georgia, Brian Kemp, to resign even though multiple recounts affirmed Mr Biden’s narrow, historic victory in the state.

Mr Trump’s premature departure from Mar-a-Lago came amid growing concern in Washington that Iran may be planning further military retaliation ahead of the first anniversary of the US killing of the top Iranian military commander Qassem Suleimani on January 3rd.

His return also comes a day after the Senate majority leader, Mitch McConnell, effectively denied Trump’s demand that Congress increase the size of coronavirus relief checks to Americans from $600 to $2,000.

Mr Trump for days delayed signing the massive stimulus package – threatening a government shutdown – over his insistence that the legislation include the $2,000 checks. Trump ultimately relented, but continued to press Republican leaders, calling their inaction “pathetic” and a political “death wish”.

On Wednesday, Mr McConnell said there was “no realistic path” for the Senate to pass a House bill that would raise the amount of money disbursed to American families grappling with the public health and economic toll of the virus.

The Senate is also preparing to override Mr Trump’s veto of a military defense bill that was passed with overwhelming bipartisan support.

As the pandemic rages, officials in Colorado and California announced the discovery of a new and possibly more contagious variant of the coronavirus, while the vaccine rollout fell behind its goals amid complaints of chaos and underfunding for states, Mr Trump maintained a relatively low public profile during the holiday break, remaining mostly out of view.

He made no public comment about the Christmas Day bombing in Nashville, nor the death of a newly elected Republican congressman, Luke Letlow, from complications related to Covid-19.

Instead, Mr Trump has remained fixated on undermining the results of the November election since he arrived at Mar-a-Lago on December 23rd, accompanied by the first lady, Melania Trump.

Already sour, his mood was darkened further when he saw the renovations to his private quarters at the club, which had been overseen by his wife in an effort to prepare their family for life after the White House, according to CNN.

Mr Trump’s earlier than expected departure means the president will not attend the resort’s annual New Year’s Eve party, a lavish, black tie affair he and his family traditionally attend.

According to CNN, as many as 500 reservations had already been confirmed for the event.

The network reported that the party is expected to go ahead without the guest of honour, despite a sharp rise in coronavirus cases and pleas from public health officials to stay home and limit the size of holiday gatherings. – Guardian