‘Like a dictatorship’: Arab citizens pour scorn on US over Washington riots 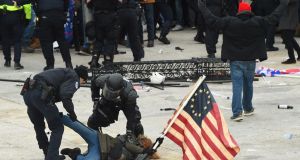 Arab governments have remained diplomatically silent as their citizens have poured scorn on Wednesday’s storming of the US Capitol by supporters of president Donald Trump.

Arabs, deeply resentful over US support for Israel and undemocratic Arab rulers, cheered coverage of the Capitol chaos, particularly when Arabic media aped western reportage of regional bouts of unrest.

Arabs were infuriated by comparisons with recent uprisings in their countries, insisting their protests were against rather than in favour of authoritarian rulers. One, Sylvia Sumser, tweeted that the US was “like a dictatorship”.

Aisha wrote on Twitter: “The people of the Middle East have tolerated oppressive and vengeful rulers for decades. When they protested for change they walked the streets with roses. They cleaned the roads of rubbish. They staged sit ins and sang in solidarity.” She concluded, “This is nothing like that”– although Arab risings have been both violent and peaceful.

After CNN commentator Van Jones said Wednesday’s chaotic events “looked more like Syria than the USA”, Danny Hajjar tweeted, “This is what infuriates me. Stop these comparisons.” Rowaida Abdulaziz wrote: “What you’re watching is American through and through. Don’t compare this to the Middle East. This is your mess.” Another said: “This is white supremacist violence and is 100 per cent American.”

Having endured US invasion and occupation, Iraqis flooded social media with snippy comments. One wrote: “The Iraqi government urges the American people to show restraint and avoid violence.” Another quipped that the Arabs would dispatch envoys to promote “peaceful solutions”.

Hind Hassan hoped “looted American artefacts turn up on display in Baghdad’s National Museum of Iraq and are kept there indefinitely for protection as well for the cultural viewing pleasure of locals”.

Many Arabs, Turks and Iranians feel that the US is being punished for decades of destructive meddling in regional affairs. An image of the Statue of Liberty on life support has circulated widely.

Having felt anti-US hostility for decades, Turks were brutal in their comments. One tweeted: “The curses of the children you slaughtered are yet to take effect.”

The Turkish foreign ministry was measured: “We believe that the USA will overcome this domestic political crisis calmly”, and urged restraint.

Iranian president Hassan Rouhani said the incident displayed “what a failure western democracy is” and how “populist” Donald Trump has “damaged the reputation of his country.”

Mr Rouhani urged the incoming Biden administration “to restore the country to a position worthy of the American nation” by returning “to reason, legality, and [its] obligations” – meaning the 2015 agreement for easing sanctions in exchange for dismantling Iran’s nuclear programme.