Lefties in the US need to get over themselves

Chris Johns: ‘Woke’ politics are a turn-off for many people who just see political correctness on steroids 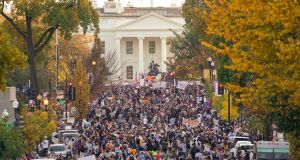 One of the many ways of looking at who voted and why reveals that very poor and very rich people were more likely to be Trump voters. Photograph: Pablo Martinez Monsivais/AP

The slicing and dicing of the data has begun but will the right lessons be learned? The fundamental question, “will Trumpism survive Trump?”, is already being answered in very different ways.

Most of those answers are already definitive: respected political commentators conclude with certainty. The interesting thing is that certainty. We live in an age when complexity, subtlety and nuance are forbidden.

That, perhaps, is one observable legacy of Trumpism: the evisceration of the political centre pushes everyone to the the extremes where the only thing that matters is a peacock display of the strength of your prejudices.

Our beliefs are less important than the vice-like grip within which they are held.

Unacknowledged complexity is everywhere. The BBC’s flagship Newsnight programme was not alone in marvelling at the failure, again, of the opinion polls. It presented an excellent analysis of possible reasons why they got it so wrong.

And then earnestly discussed an exit poll in which people put the economy top of the list of reasons for voting in a particular way.

At no point did the analyst appear to realise he was merely discussing another poll, presumably as inaccurate as all the others. Who is going to say, “I voted for Trump because I like his misogyny, racism and lies”?

Unless we acknowledge the complexities of why people vote the way they do, we will repeat the mistake of the drunk, walking home in the dark, searching for his dropped keys: if we only look where the lamp-post shines its light, we will fail.

Disavowing complexity enables populists like Michael Gove to trash expertise and for Donald Trump to fire anyone who is in possession of specialist knowledge. The relationship between politics and complexity has long bothered philosophers.

Bertrand Russell wrote: “There are many matters of the utmost importance which are too difficult for ordinary citizens to understand.” I doubt he would survive the resulting social media attacks were he to opine in such terms today.

Russell thought that the solutions we adopt to cope with complexity determine whether or not we slide into dictatorship. He noted how various societies throughout history have not handled these things well.

He would, I think, say Trumpism is just one example out of many that all say the same thing: Democracy is fragile and only survives if we believe in science over superstition.

In the US, and probably closer to home, progressive, lefties and liberals need to acknowledge that many of their fellow citizens find them preachy, naive and joyless.

“Woke” politics are a turn-off for many people who just see political correctness on steroids. Social conservatism that runs through disparate demographic groups is something the left seems utterly unable to acknowledge.

The Democrats didn’t help themselves when they fell into the same trap as the Remain side of the Brexit campaign: mocking your opponents does not persuade a single one of them to change their minds.

Barack Obama made funny speeches in support of Biden with lots of mockery of Trump. While not quite as overt as Hilary Clinton’s description of Trump voters as ‘deplorables’, Obama’s remarks were in the same ballpark with the same consequences. He did Biden few favours.

None of this is to say that the worst aspects of Trumpism should not be countered in the most robust terms possible. The racism, misogyny, lying and trashing of constitutional politics all deserve nothing less than total repudiation.

Those that do espouse these kinds of views are probably unpersuadable. It’s the people who don’t like Trump but nevertheless voted for him that need some empathy.

That’s not the same thing, necessarily, as agreeing with them: empathy, in this context, is simply making an effort to understand where they are coming from, something that liberal, centrist-types on both sides of the Atlantic are unwilling to do.

The tin ears of the liberal, elite establishment are obvious to anyone who followed the rise of Trump and the success of the Brexit campaign. Trump was on to something when he promised to “drain the swamp”.

I’ve heard liberals ask `why should we be the ones to make the effort to listen to the other side?' That’s just childish

That he did nothing of the kind is beside the point: modern capitalism simply creates too many losers, too many divisions.

I’ve heard liberals ask “why should we be the ones to make the effort to listen to the other side?” That’s just childish. The only ones making that effort right now are Trumpists such as Nigel Farage. Britain’s populist has recently spotted yet another political vacuum with which to fill with bile: the lack of trust in UK epidemiologists.

One of the many ways of looking at who voted and why reveals that very poor and very rich people were more likely to be Trump voters. I think this tells us a lot about the economic roots of populism.

Trumpism – populism – will survive unless it is effectively opposed. That requires centrists and the left to stop sneering and to start thinking. That age-old problem of the relationship between expertise and democracy is front and centre.

Populists – Trump in particular – thrive on trashing experts. More generally, any societal norm is there to be whacked. Liberals should stop with the faux outrage and start engaging.