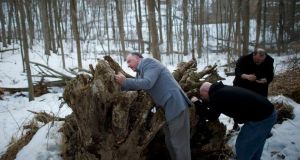 Historian Frank Watson (right), and brothers Bill Schandelmeier and Earl Schandelmeier examine a tree stump at the resting place of seven of 57 Irish labourers who perished at a railroad construction site in 1832. Photograph: Mark Makela/Reuters

The Irish enjoyed another warm embrace in Washington yesterday as Taoiseach Enda Kenny passed shamrock and swapped compliments with US president Barack Obama on the strength of Irish-American relations at the White House. The Irish have not always been as welcome in the US.

If you ever take the train from Philadelphia to Chicago, almost 30 miles west of Philly’s 30th Street Train Station you might see a stone wall and blurred sign as you fly by at 80 miles an hour.

The sign commemorates a mass grave at Duffy’s Cut, a spot along the railway line in wooded Pennsylvania, where, in 1832, 57 Irish immigrant workers, employees of a contractor named Duffy, either died of cholera or met a grisly end at the hands of locals fearful of being infected or hateful of new immigrants, fresh off the boat from Ireland, during an era of “nativist” attacks. Such violent incidents against Irish Catholics and new arrivals from Ireland were common in the 1830s and 1840s as older immigrants sought to protect political interests or prevent the suppression of wages with the arrival of new workers. Just think of William “Bill the Butcher” Poole, the violent anti-Irish protagonist in Gangs of New York , Herbert Asbury’s 1928 non-fiction book or Martin Scorsese’s film adaptation, to get an idea of the hatred nativists had for new immigrants.


Research
Investigative work by Bill Watson, a history professor at Immaculata University in Pennsylvania near the Duffy’s Cut site, and his brother Frank, among others, over a decade has revealed the more sinister aspect to the story of the 57 dead immigrants. About five years ago, researchers digging the area uncovered the remains of seven people, three of whom showed signs of having met violent deaths.

This has led to the historians to ponder whether they are investigating cholera deaths or the worst mass murder in Pennsylvania’s history. Their findings have yet to reach a definitive conclusion.

Watson said the deaths occurred at a time when the East Whiteland Horse Company, a vigilante group, operated along the mile of track where Duffy’s Cut is located. These horse companies acted as a kind of insurer, helping members to recover stolen horses and punish the thieves. Watson said the vigilantes may have enforced a quarantine violently to protect locals from the cholera epidemic.

The Watsons have been interested in Duffy’s Cut since 2002 when they were bequeathed their file from their grandfather on the deaths. He had worked for Martin Clement, one-time president of the Pennsylvania Railroad. Clement investigated the deaths in 1909, amassing letters, newspaper clippings and other documents. Until this century, the story of the men remained largely unknown.

Watson is convinced that contractor Philip Duffy and the railroad company covered up the deaths fearing the effect it would have on the flow of new recruits from Ireland. The suppression of the story in the decades after the deaths worked; Duffy lived to be a rich man in Philadelphia until his late 80s.

The task of digging up the remains and identifying the dead continues. One of the 57, John Ruddy, an 18-year-old labourer from Donegal, was identified by an unusual dental anomaly and interred back in his native Donegal. Others came from Tyrone and Derry. Watson hopes that if they find Williams Burns, who, at 70, was the oldest man to die at Duffy’s Cut, they can bury his remains back in Tyrone.

US rail firm Amtrak owns the land at Duffy’s Cut and is working to reach an agreement with the researchers to allow access to the site. The proximity of the busy railway next to the wooded area makes access “extreme dangerous”, the company said in a statement.


Immigration
Watson says the Duffy’s Cut deaths reveal not just a hidden history of US labour, but the story of Irish immigration in America. As the father of a 21-year-old son, around the average age of the Irish men who died in this Pennsylvania woodland, he takes the telling of their history personally.

“It is shedding light on an aspect of early industrial history in America, a history of American immigration and a history of Irish America,” he said. “Every Irish family has a story of people who came over and were lost sight of. We hope that the 57 individuals will get remembered instead of being swept under this huge process of industrialisation.”

At a time when Obama is attempting to improve the lives of the so-called working poor by forcing businesses to pay overtime and attempting to raise the national hourly minimum wage from $7.25 to $10.10, the story of the Duffy’s Cut workers shows how far America has come since the cruel working existence of the early 19th century.

The fact that the Duffy’s Cut stretch of railway, the first railroad to be built in Pennsylvania and the second in the US, forms part of the main Philadelphia-Chicago line shows the contribution the men made to America’s infrastructure, their bones lining those tracks.

“They died building something important,” said Watson. “They didn’t die in vain.”