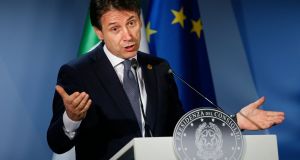 Leaders of the seven EU Mediterranean countries will gather in Cyprus on Tuesday for a summit on migration, European energy, security, euro zone reform, climate change and Brexit.

The leaders, attending the fifth such summit, will also prepare for the first EU-Arab League summit convening in Egypt at the end of next month.

France, Portugal, Malta, Italy, Greece and Cyprus are participating at presidential and prime ministerial level, while Spain has sent its foreign minister.

Cyprus’s president, Nicos Anastasiades, praised the practice of holding such meetings as they provided opportunities to “exchange views on the most pressing issues on our European agenda”.

He said the summits offered “a unique and ideal setting for unifying our best ideas and strengths and in this way enable us to make a substantial contribution to the formation and advancement of innovative, comprehensive and sound European policies”.

Euro-Med 7, colloquially known as “Club Med”, was founded in 2013 by EU members with Mediterranean coasts.

Annual ministerial meetings have been punctuated by regular summits.

Cyprus’s foreign minister, Nikos Christodoulides, said that since migration from the Middle East and Africa had a greater impact on EU Mediterranean countries than other bloc members, the goal would be to come up with suggestions on how to deal with the issue and adopt common positions.

This is likely to involve intense talks as there are serious differences over receiving and hosting migrants.

On energy, Mr Christodoulides said the aim was to enhance autonomy and independence.

Mr Anastasiades will raise Turkey’s incursions with exploration ships into Cyprus’s exclusive economic zone and threats to prevent the internationally recognised republic from exploiting its gas reserves until there is a political settlement with the breakaway Turkish Cypriot state sponsored by Ankara.

Mr Christodoulides said “We are following developments in Britain very closely” and spoke of the EU’s need to maintain a unified policy on Brexit.

He said the EU should take a more active role in efforts to achieve reunification of Cyprus, divided since 1974 when Turkey occupied the northern 36 per cent of the island following an attempted coup by the Greek junta.

“We think that the EU can offer solutions to all issues on which there are disagreements”, including “security and the functionality” of a future deal reached in negotiation between Greek and Turkish Cypriots, he said.

On the EU-Arab League summit, he said Cyprus had long supported the need for such a meeting as the EU and Arab Mediterranean countries had common interests and problems.

The EU is eager to discuss migration and measures to combat people smugglers with Middle Eastern and North African countries, as well as boosting trade and investment in jobs in sub-Saharan Africa where warfare and poverty drive migration.