Aerial footage shows the extent of the damage caused after a mining dam collapsed in Brumadinho, Brazil. Video: CCTV 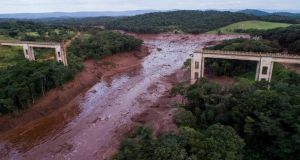 Brazilian rescue workers on Saturday continued to search for roughly 300 missing people after a tailings dam burst at an iron ore mine owned by Vale SA, amid faint hopes of finding many alive.

Thirty-four people have been found dead after the dam burst in Brumadinho on Friday, releasing a torrent of sludge, while nearly 200 people have been rescued, according to firemen running the rescue effort in the town.

“Unfortunately, at this point, the chances of finding survivors are minimal. We’re likely to just be rescuing bodies,” Romeu Zema, governor of the mining-intensive state of Minas Gerais, where the disaster struck, told local press.

All of those missing are Vale employees or contractors, a police spokesman said.

It is feared the death toll will grow as rescue and recovery teams dig through feet of mud.

The Minas Gerais state fire department said 23 people have been hospitalised after the incident on Friday, which left a roughly 150m-wide wake of destruction.

President Jair Bolsonaro described the collapse as a “tragedy”.

Fabio Schvartsman, chief executive officer of Vale, said he did not know what caused the collapse.

“The principal victims were our own workers,” Mr Schvartsman told a news conference, adding that the restaurant where many workers ate “was buried by the mud at lunchtime”.

After the dam collapsed, parts of Brumadinho were evacuated, and firefighters rescued people by helicopter and ground vehicles. Local television channel TV Record showed a helicopter hovering inches off the ground as it pulled people covered in mud out of the waste.

Photos showed rooftops poking above an extensive field of the mud, which also cut off roads. The flow of waste reached the nearby community of Vila Ferteco and a Vale administrative office.

“I’ve never seen anything like it,” said Josiele Rosa Silva Tomas, president of Brumadinho residents’ association. “It was horrible . . . the amount of mud that took over.”

Ms Silva Tomas said she was awaiting news of her cousin, and many she knew were trying to get news of loved ones.

Mr Schvartsman said the dam that burst was being decommissioned. He said equipment had shown the dam was stable on January 10th.

Another dam administered by Vale and Australian mining company BHP Billiton collapsed in 2015 in the city of Mariana in Minas Gerais, resulting in 19 deaths and forcing hundreds from their homes.

Considered the worst environmental disaster in Brazilian history, it left 250,000 people without drinking water and killed thousands of fish. An estimated 60 million cubic metres of waste flooded rivers and eventually flowed into the Atlantic Ocean.

Mr Schvartsman said what happened on Friday was “a human tragedy much larger than the tragedy of Mariana, but probably the environmental damage will be less”.

Mr Bolsonaro, who assumed office on January 1st, said he lamented the accident and sent three cabinet ministers to the area.

“We will take all the possible steps to minimise the suffering of families and victims,” Mr Bolsonaro said.

Mr Bolsonaro flew over the area by helicopter on Saturday. The far-right leader campaigned on promises to jump-start Brazil’s economy, in part by deregulating mining and other industries.

Environmental groups and activists said the latest spill underscored a lack of regulation.

The latest spill “is a sad consequence of the lessons not learned by the Brazilian government and the mining companies responsible for the tragedy with Samarco dam, in Mariana, also controlled by Vale”, Greenpeace said in a statement.

According to Vale’s website, the mine waste, often called tailings, is composed mostly of sand and is non-toxic. However, a UN report found that the waste from the 2015 disaster “contained high levels of toxic heavy metals”.

More than 100 firefighters were on the scene and another 200 were expected to arrive Saturday.– Reuters/AP

1 Boy’s treatment by school over alleged thefts was ‘unbelievable’, judge says
2 Irish in Canary Islands: Life has changed dramatically
3 Pubs to stay closed until September at least as restrictions tightened significantly
4 Hume brought to Derry as candles in windows light his way
5 ‘This was like a nuclear bomb’: More than 2,700 injured in Beirut explosion
Real news has value SUBSCRIBE