The Irish town trying to fight back against coronavirus

Behind the closed shutters, there is hope and resilience in Waterford 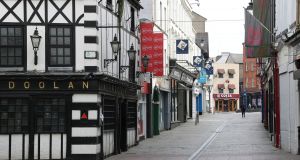 The clamour of the seagulls cuts through the silence on Sir John Roberts Square, in the heart of Waterford’s retail district.

On a sunny day like this, the square should be full of shoppers and people congregating around the outdoor seating for a coffee or bite to eat.

Now, amid the coronavirus crisis, it is deserted. All but two shops are closed. On one side of the square, Gallagher’s pharmacy is admitting one customer at a time. A sign outside says hand sanitiser is back in stock. “No masks or gloves,” it reads.

On the other side of the square is O’Flynn’s Butchers, which has been able to remain open throughout the crisis. The family business which has been operating in this building since 1840, has never experienced anything like this, says Ben Flynn, who has worked here for 17 years, alongside his father.

“It’s sad seeing the town like this. It’s weird. The only thing I can liken it to is Christmas day, but it’s like that every day now.”

The Flynns are determined to do whatever it takes to keep going. That has meant negotiating with the council to have the bollards blocking one entrance to the square removed three days a week, so the shop can offer a new contactless phone-and-collect service to customers.

Flynn knows most of the regulars’ cars, so when they drive up outside, he runs out and puts it straight in the boot. “One man rings up and just says, I’ll have the usual,” he says.

He has tracked down numbers for other customers, and rings around checking up on them, and to see if they need anything. “If anything, we’re busier than before,” he says.

Waterford has been slow to recover from the recession. Uncertainty over the timing of ambitious proposals for a new development north of the river has, some believe, delayed recovery in the old city, as some international retailers have been waiting to see what happens before committing.

Now, it’s as though the city has been projected forward into its most dire predictions. Right across the square, shutters are pulled down and signs tacked to the windows promising ‘Back Soon’ or ‘Closed awaiting further news’.

But behind the closed shutters, there is hope and resilience.

Inside the Book Centre, two staff members working at a safe distance, are preparing orders from the website for delivery. “We all knew it was coming, though not for as long as they’re talking about now. So a good 10 days before we closed, I set everybody up to work remotely,” says managing director, Maeve Ryan.

After an initial period of confusion about whether online deliveries could continue, the Book Centre’s website is up and running, and providing some cashflow to the business.

Ryan and other business owners on the square have been communicating much more regularly via WhatsApp, and are already thinking about ways to get people back shopping locally when the lockdown ends.

“We talk a lot about getting the message out that if you support local and support smaller retailers, it will come back to you. It has taken something like this for people to realise that if they don’t support local, there won’t be anything local to support.”

Around the corner, inside Finders Keepers, a boutique interiors and gift shop, owner Lisa Kinsella is packing up orders for delivery. Orders via her new website and Instagram have kept her going through the lockdown.

“Amazon was still delivering, so it would be crazy for us not to. We’ve taken a hit, but we’ve still got good sales coming in. I’m still able to supply orders with suppliers and I’m able to pay our bills. If I can keep our little entity going, I can help keep our suppliers and designers going, and that’s what it’s all about,” she says.

She feels the lockdown will give people a taste of what it would be like if the high street was allowed to die. “From the messages I get on social media, I think people realise what they’re missing now, how much they value their trips into town for a coffee and a browse.

“I really do think people will get behind us after this. There has always been great support for independent businesses. I think it will shine even brighter now.”

Heroes, a few doors down from the Book Centre, is one of four menswear boutiques in the city owned by the Fitzgerald family. Without an online presence, they have not been able to keep operating, and have had to let 65 staff go temporarily. “The shutdown is awful,” says Aoife Fitzgerald.

The crisis could end up accelerating some hard decisions that might have been put off for a few more years, she thinks. “There’s one school of thought that the crisis will remind people what they will lose if they don’t shop local.

“There’s another that says it might push people into shopping online. For one city, having four offerings of menswear – I don’t know how sustainable that will be long term.”

Everyone in business here is saying the same thing, says Lisa Fitzgerald, who co-owns No 9 restaurant and Carter’s Café.

“It’s not like the recession. This is completely beyond our control and we’re all in it together. So while it’s financially bigger, it’s emotionally much easier to cope with.”

When the lockdown came, one of the chefs in the business organised the distribution of fresh produce to older people living in the area. Fitzgerald donated chocolate products which would have gone out of date to gardaí, the fire station and Waterford Regional Hospital, and delivered Easter eggs to families locally.

A partial re-opening with strict social distancing guidelines will hit restaurants and cafes hard, she points out. “Reopening to make a loss is a huge risk which will have to be managed.

“We know social distancing will likely last for months [and would] cost sales. We’re now looking at a completely new business model for the future.”

Still, like everyone else around the square, she’s staying positive. “We are looking forward with hope to the day we are back in business.”