UK could stay in EU beyond March 2019, Brexit committee says 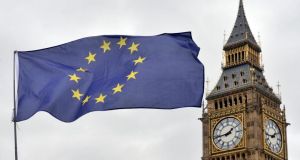 Brexit: the Commons committee says London has made little progress on the problem of how to maintain an open Irish Border if the UK leaves the customs union and single market. Photograph: Victoria Jones/PA Wire

The UK should consider remaining in the European Union beyond March 2019 to allow more time to resolve issues such as the future of the Border, the House of Commons Brexit committee has proposed.

The cross-party committee says in a report on the current negotiations that Theresa May’s government has made little progress on solving the problem of how to maintain an open Irish Border, with no checks and no infrastructure, if the UK leaves the customs union and the single market.

“The government must now come forward with credible, detailed proposals as to how it can operate a ‘frictionless border’ between Northern Ireland and the Republic of Ireland, because at the moment the committee is not persuaded that this can be done at the same time as the UK is leaving the single market and the customs union. We know of no international border, other than the internal borders of the EU, that operates without checks and physical infrastructure. This is deeply concerning,” the committee’s chairman, the Labour MP Hilary Benn, said.

The report comes at a crucial moment in the UK’s negotiations with the EU, as officials attempt to reach agreement on a transition period to follow next year’s exit. The transition deal is part of an overall withdrawal agreement that includes a commitment to maintain full regulatory alignment in both parts of Ireland if other options for avoiding a hard border cannot be agreed.

Ms May has rejected the EU’s draft text on this issue because it does not include a commitment to avoid any new barriers between Northern Ireland and the rest of the UK. The Government and the European Commission have insisted, until now, that there can be no agreement on a transition period before the text on the Border is agreed.

The UK is pressing to have the issue kicked forward so that it would be resolved as part of negotiations on its future partnership and trade relationship with the EU.

The Brexit committee supports Ms May’s rejection of the draft text because it says that any deal on full regulatory alignment with the EU should apply to the UK as a whole.

London and Brussels hope to agree terms of withdrawal and a future partnership by October, to allow time for the European Parliament and Westminster to ratify the deal. The committee says that, if substantial parts of the deal remain to be negotiated by then, the UK should seek an extension of the time limit imposed by article 50 of the Treaty on European Union.

The committee’s report was approved by a majority of its members, but a substantial minority, including Sammy Wilson of the DUP, rejected the recommendations about Northern Ireland.