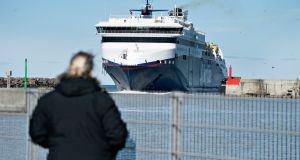 The Government should direct ferries transporting goods to prioritise the safety of lorry drivers on board, the haulage industry said. Photograph: Henning Bagger/Ritzau Scanpix via AP

The Government should direct ferries transporting goods to prioritise the safety of lorry drivers on board to guarantee continued supply of vital products into the State, the haulage industry said.

The Irish Road Haulage Association has said that the ferry operators have told drivers that they will provide single-occupancy cabins where available.

This has led to fears that lorry drivers – many of whom are driving through areas in Europe badly hit by coronavirus – may be exposed.

The association has written to Minister for Business Heather Humphreys and other Ministers seeking a direction on the issue, calling for freight to be given priority over tourism in order to ensure the continued supply of food, cleaning and sanitary products and medical supplies.

Truck drivers are usually forced to share twin cabins with other drivers, who often they do not know, on ferries operating between the UK and Ireland, and mainland Europe and Ireland.

Tony Goodwin, general secretary of the IRHA, said the Government could not make pledges to guarantee the continued supply of essential goods into the country in an effort to deter panic-buying and stockpiling in supermarkets if drivers delivering the goods were not protected.

“Heather Humphreys cannot make the promise she made on Thursday that shelves will continue to be filled unless she knows it is going from distribution centres to the shops,” he said.

The Government has urged people to self-isolate on returning from Italy and Spain, but Mr Goodwin said drivers could not do this because they have to continue transporting goods.

Irish Ferries has told the IRHA that “there simply is not sufficient cabin capacity on all ships on all sailings to provide a single cabin for each driver”.

Stena Line UK said that “where possible” it would provide freight drivers with single occupancy rooms at no extra charge.

Brittany Ferries has told the IRHA that its policy on the Rosslare-Bilbao service was “to allocate one cabin per truck, where possible” and that “only when all available cabins are used would we consider allowing drivers to share”.