Coronavirus shows society in better shape than we thought

US Politics: It is natural to anticipate better days, but there is good news already behind us 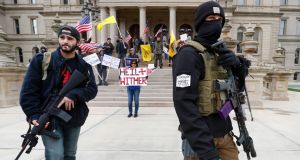 In Michigan, gun-toting men demand the reopening of businesses. In Florida, gym regulars do roadside push-ups to protest at the closure of their facilities. In California, Tesla starts its car plant again in the teeth of local restrictions. If impatience to resume normal life builds as spring becomes summer, the past few days will be remembered as the inflexion point.

Until such time, though, the dissent is more striking for its smallness and slowness in coming. All of the flash points above stand out in a wider context of general compliance.

For upwards of two months now, people in the US and other democracies have mostly gone along with mass confinement and economic torpor. They have done so on the guidance of a political class they are meant to despise and unelected experts that they are assumed to mistrust.

It has been likened to wartime discipline, but this is to undersell it a tad. Wars at least give us an enemy with a name and a face to unite against. The virus is invisible and, except for those of a medical ken, hard to understand. The show of civic togetherness is all the more impressive for that.

Nor can it be said that people have had no other choice. Had, say, one-fifth of the population bucked the rules, the government would have been left with very little recourse. Unable to police that many, the choice would have been martial law or some degree of capitulation.

Civilised order ultimately rests on consent. We are forced to entertain the possibility that society is in better shape than billed. This stark news I address to conservatives but also to the left, as both sides have come to traffick in versions of cultural declinism.

For the first, the problem is several decades of irreligion, permissiveness and the debasement of a national way of life through immigration. For the second, the problem is several decades of unfettered markets and the commodification of people. But both converge on the same bleak picture: an atomised and decadent society, less than the sum of its parts, brittle for all its outward riches. Both are nostalgic for the mid-20th century, when most western nations were more homogenous and more equal.

Theirs is an analysis that makes intuitive sense. In fact, it is strange that it is not true. If liberalism means anything, it is that society has limited claims on the individual. Collective action must therefore be harder to pull off.

And yet if it were as straightforward as that, the past two months would have been much uglier. We should have seen more resistance, more quickly, to a lockdown that has no precedent in peacetime. And cities, those pits of liberalism, should have been the most anarchic.

The Republican senator Ted Cruz once referred to “New York values”, which he implied were selfish and nihilistic. Well, the city has been the worst-afflicted part of the US, and it has not yet curdled into a Hobbesian free-for-all.

At the least, I expected public pressure for a more bespoke shutdown, isolating the old and the otherwise vulnerable. In fact, we are seeing almost the opposite clamour. By two to one, Americans worry that restrictions will be lifted too soon, not too slowly. That margin is unchanged since early April. Many did not even wait for their state governor’s edict before cloistering themselves.

The dissenters are real and it takes only a small number to undo a whole nation’s public health efforts. They may yet multiply to ruinous effect. But their photogenic gatherings fool us that they, not general obedience, has been the story. And it is obedience that, at least in the US, is achieved through mutual social pressure as much as through uniformed agents of state. The lightness of policing in Washington, capital of the world’s most militarised democracy, has been scarcely believable.

As the shutdown eases, it is natural to anticipate better days. But in one sense, there is good news already behind us. The shutdown was a test of the social fabric’s tensile strength. The cloth is still in one piece. Fiscal support helps, as does fear of infirmity or death. But there are cultural pessimists who would not have predicted such discipline, even with these things.

It turns out that liberalism does not by definition breed egoism and irresolution. A lot of the easy calumnies against it (“We could never fight a war now”) appear less certain. And if the “horizontal” bond among citizens is a bit stronger than assumed, so is their “vertical” cord with government.

Anti-elitism – the spirit of the age, we thought – is broad but it can also be shallow, or at least selective. The speed with which people deferred to the medical and bureaucratic establishment was telling. The crisis has found nothing more wanting than our cynicism. – Copyright The Financial Times Limited 2020