Trump and Kim shake hands to kick off second summit

North Korean leader praises US president for his courage, as Trump describes meeting as an ‘honour’ 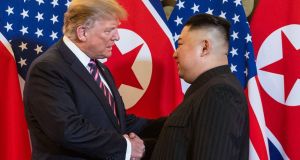 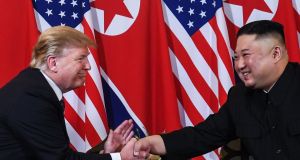 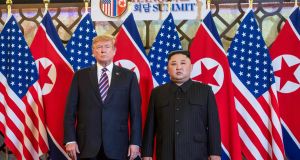 Donald Trump and Kim Jong-un have begun their two-day summit in Hanoi, as the US president tries to revive efforts to persuade the North Korean leader to follow through on his pledge to abandon his nuclear weapons.

Shortly after arriving at the Metropole Hotel, Mr Trump and Mr Kim met in front of a phalanx of American and North Korean flags. The leaders shook hands and smiled as they exchanged greetings.

Asked if the two leaders would announce a political declaration to end the 1950-1953 Korean war, Mr Trump said: “We’ll see.” He also denied that he had walked back from his demand for denuclearisation.

In brief remarks before their dinner, Mr Kim praised Mr Trump, saying their meeting in Hanoi was “thanks to the courageous decision” by the US president.

“During that 261 days since we last met, there have been some misunderstandings,” Mr Kim said through a translator. “I actually believe that those 261 days were the days ... during which a lot of painstaking efforts were necessary and also a lot of patience were needed. But here we are today, sitting next to each other, and that gives us a hope that we will be successful with time. And I will really try to make that happen.”

Mr Trump responded that it was “an honour” to be meeting Mr Kim in Vietnam, and reiterated that North Korea had the potential to follow in the economic success of the south-east Asian nation if it abandoned its nuclear weapons.

Mr Trump and Mr Kim are set to hold meetings on Thursday following their dinner on Wednesday. The two leaders have formed an unusual bond since their first meeting in Singapore.

Less than two years since Mr Trump threatened “Rocket man” with “fire and fury”, the US president now refers to Mr Kim as his “friend” and even said that they “fell in love” after he received “beautiful” letters from Mr Kim.

Vietnam is thriving like few places on earth. North Korea would be the same, and very quickly, if it would denuclearize. The potential is AWESOME, a great opportunity, like almost none other in history, for my friend Kim Jong Un. We will know fairly soon - Very Interesting!

While Mr Trump and Mr Kim have strengthened their relationship, US officials have failed during the past eight months to make any real progress towards the goal of denuclearising the Korean peninsula.

Mr Trump has in recent months lowered expectations about the summit by claiming that he has already produced a big win because North Korea has not tested any missiles or nuclear weapons in 15 months.

Some critics privately concede that Mr Trump has helped lower tensions on the Korean peninsula but say his comments about there being no urgency reduce the pressure on Mr Kim to take concrete steps.

Ahead of the meeting, speculation has mounted that the two sides will agree several measures that could include opening liaison offices in their respective countries. The two leaders may also announce an end to the Korean war, which concluded with an armistice.

Steve Biegun, the main US negotiator, said recently that Mr Kim had signalled he was willing to destroy the plutonium and uranium-enrichment plants housed at Yongbyon nuclear complex in return for “corresponding measures” from the US. But he did not outline what those measures would entail.

Richard Fontaine, a Republican foreign policy expert and chief executive of the Center for a New American Security think-tank, said the two sides had still not arrived at a consensus over the meaning of denuclearisation.

“Months after Singapore ... there appears to be no shared understanding of what ‘denuclearisation’ means, let alone a mutually agreeable path to achieve it,” said Mr Fontaine.

After an initial short private meeting, Mr Trump and Mr Kim had dinner with their top aides. Mr Trump was joined by Mike Pompeo, secretary of state, and Mick Mulvaney, his acting chief of staff. Notably absent, however, is John Bolton, the hawkish national security adviser who before joining the administration had advocated that the US attack North Korea.

According to the White House, Mr Kim was to be joined by Kim Yong Chol, his main negotiator, and Ri Yong Ho, the North Korean foreign minister.

The arrival of the two leaders in Hanoi has caused periodic traffic gridlock in a city not used to hosting the roughly 3,400 journalists from 39 countries who have come to cover the high-profile event.

Nguyen Duc Chung, the top municipal official, said the city had mobilised more than 10,000 police and other security forces for the event.

Earlier on Wednesday, Mr Trump met Vietnam’s president and communist party chief Nguyen Phu Trong, and the two men presided over a signing ceremony for the purchase of $18 billion (€15.8 billion) of planes and engines from Boeing and General Electric by the fast-growing Vietnamese airline VietJet.

At the meeting, Mr Trump said Vietnam, with its rapid economic growth, was a “good example of what could happen” if North Korea abandoned its nuclear programme.

The North Korean delegation did not provide any information about what Mr Kim did on Wednesday before the summit. – Copyright The Financial Times Limited 2019