DUP’s position could determine fate of May's deal and Brexit 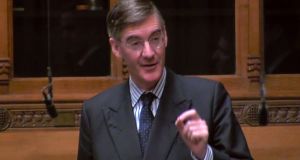 Jacob Rees-Mogg: now says he could vote for the prime minister’s deal even if the Northern Ireland backstop was not replaced. Photograph: Ho Pru/AFP/Getty (

Few at Westminster were expecting MPs to vote on Yvette Cooper’s amendment confirming Theresa May’s commitment to give them a vote on delaying Brexit if they rejected the withdrawal agreement. The government said the amendment was unnecessary but agreed to join opposition parties in supporting it on the basis that it echoed the prime minister’s own policy.

But when the Speaker put the amendment to a voice vote, the No’s were just too loud to ignore and he called a division. The result was illuminating, with 20 Conservative Brexiteers voting against the amendment and more than 80 more abstaining, along with all but one of the DUP’s 10 MPs.

Jacob Rees-Mogg, who chairs the European Research Group (ERG) of Conservative Brexiteers, set pulses racing on Wednesday morning when he said he could vote for the prime minister’s deal even if the Northern Ireland backstop was not replaced.

He told the BBC that the changes he sought to the backstop could be written into an appendix so that the text of the agreement itself would not have to be reopened.

“Bear in mind, the Irish backstop is in itself an appendix to the treaty. So if you had a further appendix that said, ‘This will not go beyond a particular date’, and a short date, not a long date, then that would remove the backstop in the lifetime of parliament,” he said.

The EU is unlikely to offer an appendix that specifies an end date for the backstop but negotiators are working on further assurances that Britain will not be trapped within it indefinitely.

Senior figures in the ERG acknowledge privately that if the changes to the backstop satisfy the DUP, all but a handful of the Conservative Brexiteers will support May’s deal.

The 20 who voted against Cooper’s amendment could be most of the hard core that will oppose the deal regardless, a number that could be offset by Labour MPs who represent constituencies that voted heavily to leave the EU in 2016. Labour’s move to support a second referendum and fears that the EU will insist that an article 50 extension must be lengthy should concentrate Brexiteer minds ahead of next month’s meaningful vote.

The DUP’s 10 MPs are pivotal and their judgment will determine the fate of May’s deal and perhaps the future of Brexit itself. And they’re saying nothing.