China vows to take retaliatory action over US tariffs 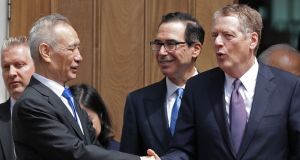 After last-minute negotiations in Washington on Thursday evening failed to reach a breakthrough, tariffs on Chinese products went into effect at midnight on Friday. Some $200 billion (€178 billion) worth of exports to the United States will now be subject to 25 per cent rather than 10 per cent tariffs.

The new tariffs will apply to goods that left China on Friday, and will impact a range of products, from household goods to clothes to car parts.

Though talks continued again on Friday in Washington between US trade representative Robert Lighthizer, treasury secretary Steven Mnuchin and China’s vice premier, Liu He, they too ended without agreement.

President Trump tweeted that the two sides had held “candid and constructive conversations” on trade, and insisted that the relationship between himself and Xi Jinping “remains a very strong one”.

He said “conversations” would continue between the two sides, a move that helped to buoy markets.

However, earlier in the day he said he was preparing to impose a 25 per cent tariff on the remaining $325 billion in Chinese imports that have so far not been affected, highlighting the trade imbalance between China and the United States. “Tariffs will make our Country MUCH STRONGER, not weaker. Just sit back and watch!” he tweeted. “In the meantime, China should not renegotiate deals with the U.S. at the last minute.”

China said it was considering “necessary counter-measures” which will likely worry American farmers who have already been hit by tariffs on soybeans and other agricultural exports that Beijing introduced in response to previous US tariffs.

Mr Trump referenced the plight of farmers – an important Republican constituency – in a tweet on Friday, claiming that the US would use the money gained by the tariffs to buy US agricultural products “in larger amounts than China ever did, and ship it to poor & starving countries in the form of humanitarian assistance”.

Last year the Trump administration introduced a special $12 billion rescue package for farmers who were hit by retaliatory tariffs on US goods introduced in response to US tariffs on China.

As well as attempts to address the trade imbalance between the two countries, the United States has been pressing China to change its rules on intellectual property for foreign companies doing business in the country.

Wall Street, which has been shaken all week by Mr Trump’s threat last weekend to move ahead with the tariffs, had another rocky day on Friday. Though the main indices did not see the steep losses many had been expecting, the stock market was on course for its worst week this year. The benchmark S&P 500 ended up 0.4 per cent, having been down by 1.6 per cent earlier in the day.

Separately, the state department announced on Friday that secretary of state Mike Pompeo will visit Russia next week.

Mr Pompeo will travel to Sochi and Moscow, and is scheduled to meet Russian president Vladimir Putin. It will be his first trip to Russia as secretary of state.

“We have many areas of disagreement with the Russian government and the secretary will have a very candid conversation about concerns in our bilateral relationship,” a senior state department official told reporters on Friday.

Among the topics on the agenda are likely to be North Korea, Afghanistan and Venezuela, where the United States has accused Russia of shoring up support for Nicolas Maduro.

Mr Trump spoke to Mr Putin by phone last week, but said he did not discuss Russia’s interference in the 2016 election.