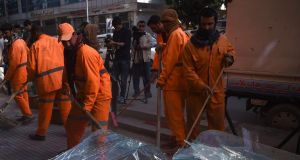 Afghan municipality workers clean up broken glass from a restaurant near the site of an attack by Taliban militants in Kabul on May 9th. Photograph: Wakil Kohsar/AFP

The brutal fighting came a day after the United States and the Taliban ended their sixth round of peace negotiations and the militant group said that it would continue to mount attacks, including ones like the car bomb directed at two western aid organisations in Kabul on Wednesday that killed nine and wounded at least 20.

Col Qais Mangal, a spokesman for Afghanistan’s defence ministry, said the Taliban had attacked two outposts in the Murghab district of Badghis province that are shared by the army, the police and the National Directorate of Security. He said the Afghan military had sent reinforcements as the fighting continued.

“Unfortunately, the Afghan forces suffered casualties, but there isn’t any information about the exact number,” Col Mangal said. Saleh Mohammad Mubarez, the district’s police commander, said that officers had recovered the bodies of 15 soldiers but that five were missing. Five police officers from the elite 444 Afghan Territorial Force were killed, he added. An official from the province said that several soldiers had been captured by the Taliban.

Murghab, one of the largest districts in Badghis, has been a battleground for Taliban and Afghan forces since early this year as both sides vie for control of the province’s main east-west road. In March, Taliban fighters nearly breached the district centre before being repelled by government forces.

While the Taliban are unlikely to hold ground for long, Friday’s loss of roughly two dozen Afghan troops highlights the see-saw effect of the peace talks, with both sides undertaking brutal campaigns of violence to maintain leverage. On Friday, the US military launched more than a dozen air strikes across the country, according to a US defence department official.

Afghan security forces have lost more than 40,000 members since 2014, and US officials have long cautioned that the current rate of Afghan casualties is unsustainable.

It was unclear whether the round of talks that ended on Thursday were successful, despite assurances of progress from the lead US negotiator, Zalmay Khalilzad. The talks, which began on May 1st, were shorter than those in March, which lasted roughly 20 days.

The US and Taliban negotiators agreed in principle on the withdrawal of US and Nato troops from Afghanistan. But in exchange, the Taliban will be required to cut ties with extremist groups like al-Qaeda. Mr Khalilzad has been unable to persuade the Taliban to allow a ceasefire or talk to the Afghan government. – New York Times

1 Bobby Storey: The IRA's planner and enforcer who stayed in the shadows
2 Coronavirus claims one more life while 11 new cases reported in Republic
3 Covid-19: Travel restrictions to stay and 'green list' put on hold amid fears of second wave
4 Rare whale dies after getting into distress in Wicklow Harbour
5 Gardaí seek help in finding missing Roscommon toddler
Real news has value SUBSCRIBE