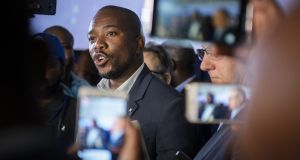 The official outcome of South Africa’s general election may be delayed after a number of smaller parties demanded an independent audit of the results, saying they believed the ballot was fixed.

At the Independent Electoral Commission’s (IEC) vote-counting headquarters in Pretoria on Friday, Romeo Ramuada, spokesman for 27 of the 48 parties that contested the election, told the media that too many irregularities had emerged in the electoral process.

“We have seen ballot boxes in people’s houses, we have seen voting stations chasing away party agents and on top of that, even where we voted at certain stations, we still got zero votes according to the IEC,” Mr Ramuada said.

“This simply shows that the results of the smaller parties were fixed. This election is not free or fair. We are not fighting with the IEC or government, we are saying the IEC must do what is right.”

The group, which does not include any of the main parties that contested South Africa’s sixth post-apartheid general election, which was won by the African National Congress with a reduced majority, also threatened legal action. It told the IEC it wanted an independent auditor to go through the election results.

The IEC has confirmed it is conducting an “urgent audit” to assess the extent of double voting, which was one of the major complaints, but the body maintains the credibility of the election result is not in doubt.

So far three separate African observer groups have declared South Africa’s general election free, fair and transparent. However, the official announcement of the results may be delayed until some sort of agreement is reached with the disgruntled parties.

By early Friday evening almost 95 per cent of Wednesday’s election’s results had been counted, with the ANC sitting on 57.76 per cent of the vote, compared with the second-placed Democratic Alliance on 20.60 per cent, and the Economic Freedom Fighters (EFF) in third on 10.50 per cent.

People have shown they are willing to forgive the ANC. We are looking at a clear mandate for our policies

The results mean the ANC will form the next government, led by its president Cyril Ramaphosa, although it will have a reduced majority in parliament. In the 2014 election the ANC won 62.15 per cent of the vote.

“People have shown they are willing to forgive the ANC,” said Ronald Lamola, a member of the ANC’s top governing body, referring to the corruption scandals that dogged the party under former president Jacob Zuma. “We are looking at a clear mandate for our policies.”

The centrist DA’s result shows a small decline on its 2014 performance, meaning leader Mmusi Maimane is the first party president to fail to grow the party at a national election.

However, Mr Maimane has maintained he will continue to lead the party and it would fight to win back the tens of thousands of supporters that abandoned the DA to support the right-wing Afrikaner party Freedom Front Plus.

Julius Malema’s radical left-wing EFF increased its share of the vote by 65 per cent, although this falls short of what the party hoped to achieve.

At the provincial level the ANC was on course to win eight of the nine provinces, with the DA regaining control of the Western Cape.

There were 26.7 million people registered to vote in Wednesday’s poll, and the voter turnout has been pegged to about 65 per cent, which is the lowest recorded for a national election since apartheid ended in 1994.

1 WHO warns of potential for ‘immediate second peak’ in Covid-19
2 Archaeologists are ‘quite sure’ they have found Red Hugh O’Donnell’s burial place
3 Coronavirus: What will reopen in Ireland’s phases to ease restrictions and what are the dates?
4 Coronavirus: No new Covid-19 deaths reported in State for first time since March
5 Maureen Dowd: Trump has been wearing a mask for years
Real news has value SUBSCRIBE