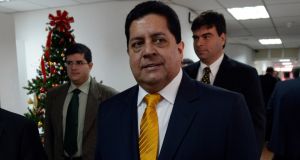 Edgar Zambrano, a senior leader of the opposition-dominated National Assembly, has been detained by Venezuelan intelligence agents. Photograph: Juan Barreto/AFP

Venezuelan opposition legislators on Friday said threatening messages had been spraypainted on their homes or intelligence agents had been following them, amid a broad crackdown by the government of President Nicolás Maduro against the National Assembly.

The country’s supreme court has accused 10 legislators in the opposition-run congress of treason for participating in a failed April uprising against Mr Maduro’s government, and security forces on Wednesday arrested the second-highest ranking legislator, Edgar Zambrano.

Further arrests could cripple the functioning of the legislature, which has been a crucial part of the opposition’s strategy to unseat Mr Maduro amid a hyperinflationary economic collapse that has fuelled an exodus of millions of citizens.

Lawmaker Maria Martinez posted a photo on social networks of a graffiti message she said was painted on her house on Thursday night that read “We’re going after the deputy.”

The message was signed with the word “colectivos”, which in Venezuela refers to armed pro-government gangs that opposition activists accuse of leading intimidation campaigns against Mr Maduro’s critics.

The information ministry did not immediately reply to a request for comment.

Opposition leader and head of the National Assembly Juan Guaidó, who assumed the interim presidency in January after calling Mr Maduro’s 2018 re-election a fraud, last week called on the armed forces to rise up against the government. The military never joined and the uprising fell apart.

Two legislators this week took refuge in the Italian embassy. Those denouncing intimidation on Friday were not among those accused of treason by the supreme court.

Mr Zambrano, who was taken to the headquarters of the Sebin intelligence agency in a tow truck on Wednesday, has been transferred to a jail at the Fuerte Tiuna military base in Caracas, according to a statement by the court in charge of Mr Zambrano’s trial.

Some 17 deputies are already either in hiding in embassies or in prison, according to opposition leaders. If another 15 deputies are detained or leave the country to avoid persecution, the opposition may not have enough deputies to hold sessions. – Reuters