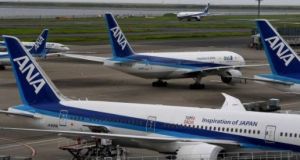 A statement from ANA said the pilot decided to return to the originating airport after a passenger was discovered on board who had intended to board a different flight. File photograph: Getty Images

A Tokyo-bound flight returned to Los Angeles hours into the journey on Tuesday after the crew discovered one of the passengers had boarded the wrong plane, an airline said.

A statement from All Nippon Airways (ANA) said the pilot decided to return to the originating airport as part of the airline’s security procedures.

Flight 175 left Los Angeles International Airport at 11.36am and returned to LAX at 7.33pm.

Police were interviewing all the people seated around the mystery person once we got off the plane. Why would they do this! I MUST KNOW MORE

They keep saying the person had a United ticket. We are on ANA. So basically the boarding pass scanner is just a beedoop machine that makes beedoop noises that register to nowhere

Why did we all get punished for this one person’s mistake? Why not just land in Tokyo and send the other person back? How is this the better idea, you ask? We all have the same questions.

I won’t be able to sleep until I know how this person figured out they were on the wrong flight. That’s all I ask. 150 people have been majorly inconvenienced, please, just tell me

US model Chrissy Teigen was on-board and live-tweeted the developments. She wondered on Twitter why the plane was turning around four hours into the 11-hour flight.

ANA said it is trying to determine how the passenger boarded the wrong flight.

In an apology to inconvenienced passengers, the airline said it takes pride in customer service and failed on this flight. – Press Association