Ukrainian forces and rebels exchange POWs as war grinds on 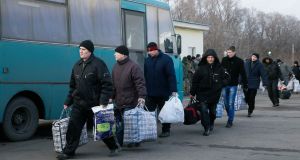 Prisoners of war (POWs) from separatist, self-proclaimed republics on the Ukraine-Russia border board a bus during an exchange of captives near the city of Bakhmut in Donetsk region, Ukraine. Photograph: Valentyn Ogirenko/Reuters

Ukrainian authorities and separatist rebels fighting in the country’s east exchanged hundreds of captives on Wednesday, in the first major prisoner swap this year, as the conflict that has lasted more than three years continues to simmer.

Ukrainian forces and separatists backed by Russia have fought for control of the country’s eastern flank since 2014, in a bloody war that has killed more than 10,000 combatants and civilians. The 2015 Minsk peace agreements outlined a prisoner swap programme, but mutual distrust and constant ceasefire breakdowns have stymied the exchanges.

But local news agencies said some of those agreed to be exchanged by Kiev refused to travel to the occupied territory, and only 246 people ultimately travelled east across the war’s no man’s land.

“There is good news of which we can say already. The exchange process is over,” Ms Lutsenko said on Facebook.

The prisoner exchange, which involved officials on both sides working around the clock for days to agree a list of names and legal framework for the swap, offers some optimism for hopes of progress on a workable peace deal.

Tillerson called on Russia to 'lower the level of violence'

But it comes amid a recent intensification of the conflict, which Kiev says began when Russia fomented a proxy war in the country after Moscow’s 2014 invasion and annexation of Crimea.

The US last week agreed to supply weapons to the Ukrainian army, which has long demanded anti-tank missiles and other equipment from western allies. The move has angered Moscow, which has warned that Washington’s involvement could result in an escalation of the fighting.

US secretary of state Rex Tillerson spoke to his Russian counterpart Sergei Lavrov on Tuesday and expressed concern over the recent flare-up of hostilities. Mr Tillerson called on Russia to “lower the level of violence”, his spokesperson said on Wednesday.

Ukraine’s pro-western government has accused Moscow of dispatching troops, weapons and equipment to the occupied territory, which Russia denies.

“Nothing is more important than to return our people home,” Ukrainian president Petro Poroshenko said during a meeting with the relatives of the hostages on Tuesday. “I hope it will be a symbol of our struggle and victory.”

“It was a very exhausting and professional struggle for everyone. I believe it will bring the result tomorrow,” Mr Poroshenko added.

Boris Gryzlov, Russia’s representative to a Ukraine-Russia contact group facilitated by the Organization for Security and Co-operation in Europe (OSCE), said such prisoner swaps could continue to take place.

“This is an important event above all for the people returning home, who will celebrate the new year together with their relatives and loved ones,” Mr Gryzlov told local media on Wednesday. “This is the first stage of the exchange in the all-for-all format.”

Martin Sajdik, the OSCE’s representative to the trilateral talks, on Tuesday welcomed the exchange as a “deeply humanitarian gesture”.

“I call upon the sides to provide conditions of dignity and respect for each of the persons to be exchanged,” he said. – Copyright The Financial Times Limited 2017