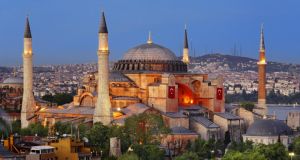 The Hagia Sophia. As a museum that attracts millions of tourists, it is worth tens of millions of dollars to local authorities every year. Photograph: Getty Images

As man-made monuments go, the Hagia Sophia is one of the world’s most distinguished. The imposing, 1,480-year-old building in the heart of Istanbul’s Sultanahmet district stood for almost 1,000 years as an ornate cathedral, a place where Byzantine emperors came to be crowned.

After Mehmed the Conqueror’s Muslim army breached the city walls in 1453, it was converted into an imperial mosque, and served as pride of place under Ottoman rule for almost five centuries thereafter.

Today, however, it finds itself at the centre of controversy. An increasing number of Turks are calling for the Hagia Sophia, Istanbul’s most spectacular building and a museum for the past 80 years, to be reconverted to a mosque.

Recent years have seen thousands of worshippers fill the vast square outside the site every May to mark the anniversary of the Muslim conquest of the city, and to rally for its reopening as a mosque. Those elements were boosted when a state-sanctioned prayer ceremony was held within the Hagia Sophia’s walls during the month of Ramadan last summer.

In attendance was the director of the powerful Directorate of Religious Affairs, the government’s religious wing, while millions of Turks watched the highly choreographed service live on a state-owned television channel.

This unambiguous government stance appears to have emboldened other strata of Turkish society. In August, two men, one wearing a shirt depicting the Turkish flag, vaulted a barrier to pray at the Hagia Sophia’s now-defunct mihrab. “This is a mosque,” one shouted, “and we should be allowed to pray here.”

Guards waited until the pair finished praying before escorting them away. On December 11th, members of a well-known, right-wing ultranationalist group recited the Islamic call to prayer inside the Hagia Sophia. They were arrested, but such incidents signify support for a change of status now stretches beyond hardline Islamic groups.

Donald Trump’s recognising of Jerusalem as Israel’s capital has reignited the issue, with Samil Tayyar, an AK Party deputy, declaring that the move should be countered by putting the Hagia Sophia to use for Muslims.

Under previous Turkish governments, the notion would have been unthinkable. When Mustafa Kemal Ataturk turned the site into a museum in 1935, his intention was to show that even a monument as significant as the Hagia Sophia would be used to showcase the nascent Turkish Republic’s secular worldview. Under the Islamist-leaning AK Party that has governed Turkey since 2003, however, that secular national identity has been curbed in favour of a more pronounced Islamic outlook.

Since coming to power, the AK Party has overseen the reconverting of a number of Christian sites around Turkey. In the Black Sea city of Trabzon, an 800-year-old church replete with stunning frescos that is also named Hagia Sophia reopened as a mosque in 2013.

Istanbul’s more grandiose equivalent, however, is of a different scale. As a museum that attracts millions of tourists, it is worth tens of millions of dollars to local municipal authorities every year. Were it to open as a mosque, that income would be lost. On top of that, an extensive project to destroy or hide its centuries-old mosaics would have to be mounted before it could open as house of Islamic prayer.

With Turkey’s Christian population numbering only around 160,000 people, most opposition to these calls has emerged from overseas. Greece’s foreign ministry condemned the state-sanctioned Ramadan event last June, calling it an “attempt to convert [the Hagia Sophia] into a mosque.” Turkey fired back, saying that “instead of extending congratulations to the Turkish people on the holy month of Ramadan”, Greece “opted for distorting the recital of Quran and call for prayer”.

International squabbling aside, it’s simple economics for those who live and work in its substantial shadow that play a role equally as important as religion.

“It has to remain a museum; we have to be respectful of each other. Of course, most Turkish people have no problem (with it reopening as a mosque), but the rest of the world would,” says a jewellery store clerk who declined to be identified. “We are in the tourism industry in this area, so we don’t want it to become a mosque again; we need those tourists.” The clerk added that in the two-and-a-half hours since he opened his doors, not a single customer had walked through. A botched coup and series of terror attacks in 2016 has resulted in many Western visitors avoiding the city.

The argument that opening the Hagia Sophia as a mosque would attract increasing numbers of Arab and Muslims visitors to Istanbul, whose numbers in the city have been rising for several years now, was swatted away by some vendors.

“The Hagia Sophia as a museum is better; we have enough mosques in Istanbul,” says Zeki Sakarya, who runs a souvenir crafts store several dozen metres from the site. “It makes no sense to favour one group of tourists over another.”