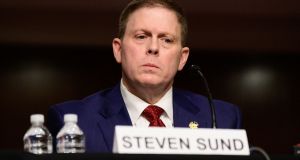 Capitol Hill security officials defended their actions on Tuesday as they appeared before a congressional committee investigating the January 6th attack on the US Capitol.

The high-profile hearing was the first to probe last month’s events, which saw thousands of Donald Trump’s supporters lay siege to the Capitol in the greatest breach of security since an 1814 attack by British troops.

Most of the officials testifying before senators on Tuesday had either been fired or resigned from their posts in the wake of the attack. The former chief of the Capitol Police, Steven Sund, described in vivid detail the scale of the challenge facing officers of the 2,000-strong Capitol Police, whose job is to defend the Capitol, on the day.

Many of the Trump supporters who attacked police, he said, were armed with pipes, barricades and flagpoles. “These criminals came prepared for war.”

But he also deflected claims that his officers were unprepared for the mass security event, instead blaming intelligence failures and the department of defence. Mr Sund confirmed that he had not seen an FBI report outlining the possible threats posed by extremists on January 6th, and later learned that it had been emailed to officials in the Capitol Police department on the eve of the riot, but it had not reached him.

Former House sergeant-at-arms Paul Irving – the top security official in the House of Representatives on that day – also blamed a lack of intelligence information.

“The intelligence was not that there would be a co-ordinated assault on the Capitol, nor was that contemplated in any of the interagency discussions that I attended in the days before the attack,” he said.

However, under questioning, both men clashed over when precisely a request was made that afternoon for support from the national guard as events spiralled out of control. Mr Sund said he called Mr Irving to request the back-up force at 1.09pm, but Mr Irving claimed that call was made an hour later. Both men were requested during the hearing to turn over their phone records to the committee.

But another witness, Robert Contee, the head of the Washington DC police department which sent back-up personnel to Capitol Police on the day, agreed with both men that the slow deployment of the national guard exacerbated the situation, and was the fault of the department of defence.

He backed up Mr Sund’s account of a phone call with the Pentagon that eventually took place later that day, in which he said he heard Mr Sund “literally pleading” for the national guard. However, army officials told those on the call that they were concerned about the “optics”, Mr Contee said.

Department of defence officials, members of the FBI and the department of homeland security are due to testify next week as Congress seeks to piece together the intelligence and security failures that allowed thousands of demonstrators to overwhelm the building.

Former president Donald Trump was impeached last month for his role in inciting the riot, which coincided with the scheduled certification of the presidential election results on January 6th. But he was ultimately acquitted in the Senate.

House speaker Nancy Pelosi – who has herself faced questions from Republicans for the Capitol’s lack of preparedness for the protests – has also announced a 9/11-style commission to investigate the Capitol attack.

Senator Gary Peters, the Democratic chair of the Senate homeland committee, said it was obvious that there was a “failure to take this threat seriously” by security officials despite online activity suggesting an attack was imminent.

He said it was important that America’s intelligence agencies take the growing threat of domestic terrorism seriously.