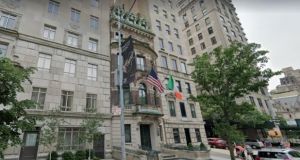 A group of high-profile Irish-Americans, including actor Liam Neeson and authors Colm Tóibín and Colum McCann, have written to the attorney general of New York, calling for the proposed sale of the American Irish Historical Society building in Manhattan to be stopped.

In a letter sent this week, the group calls on Letitia James, the attorney general for New York, to intervene in the sale of the landmark building, which was put up for sale last month for $52 million (€43.1 million).

“We believe that severing the Society from its time-honoured location, which for over eight decades has hosted leading thinkers, writers and artists from Ireland and Irish America is a tragic mistake that once made can never be reversed,” the signatories wrote. “We believe that, like St Patrick’s Cathedral and the St Patrick’s Day Parade, this architectural jewel is a living monument to the struggle and success of our immigrant ancestors.”

Among the signatories to the letter are some of Ireland’s best-known cultural and literary figures such as Mr Neeson, Mr Tóibín and Mr McCann, as well as poets Paul Muldoon and Micheal O’ Siadhail and Irish-American novelist Alice McDermott. Representatives from organisations like the Irish Repertory Theatre and the Glucksman Ireland House in New York have also signed the appeal.

The letter is also directly addressed to the attorney general’s charities bureau, amid expectations that the division may have to approve the sale of the building because it is owned by a non-profit.

The American Irish Historical Society has put the beaux-arts property on Fifth Avenue on the market for $52 million.

The association has received hundreds of thousands of euro from the Irish taxpayer in recent years through the Emigrant Support Fund run by the Department of Foreign Affairs.

“While the society is more than its premises, the building on Fifth Avenue is an iconic emblem of Ireland in New York and a vital part of the infrastructure that underpins US-Ireland relations,” he said.

In continuous operation since 1897, former members of the Society include US president Theodore Roosevelt and renowned tenor John McCormack. In 1940 the society bought its current headquarters. Most recently, the building’s interior featured in the hit HBO series Succession.

Located on the Upper East Side of Manhattan, across from the Metropolitan Museum of Art, the AIHS received a total of $993,000 between 2008 and 2018 from the Emigrant Support Fund run by the Department of Foreign Affairs. The funds have helped cover salaries, outreach initiatives and resources for its library.

The society also has several other high-profile sponsors and funders, and regularly hosts events and exhibits.

It is understood that the society has been under financial pressure for some time, a challenge exacerbated by the Covid-19 pandemic, which has halted events at the venue.

A GoFundMe campaign was launched last year as income suffered. There have also been internal conflicts within the board, culminating with the ousting of James Sheehy Normile as the president and board member.

In its listing for the building, New York real-estate agent Brown Harris Stevens state that the property is “largely intact” more than 100 years after its construction. “Buying a house located directly on Fifth Avenue is like acquiring the Holy Grail because such a limited number remain,” it states. “Simply put, this opportunity to acquire a building of this calibre directly on Fifth Avenue is one that may never occur again.”