Starmer calls for ‘moral crusade’ to tackle inequalities in UK 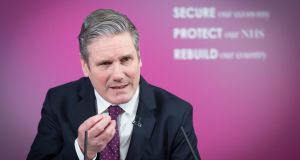 Keir Starmer has called for a “moral crusade” to address the inequalities and injustices in British society revealed by the coronavirus pandemic, promising a new partnership with business to rebuild the economy. In a major policy speech, the Labour leader blamed a decade of Conservative austerity for leaving Britain poorly prepared to deal with the pandemic.

“I’ve said a lot about the incompetence of the government in handling the pandemic and I make no apology for that. They’ve been slow at every stage. They’ve ignored advice. They haven’t learned from their mistakes. Yet a government out of its depth is not even half the story,” he said.

“The terrible damage caused by the virus to health and prosperity has been made all the worse because the foundations of our society have been weakened over a decade.”

“What sort of legacy is that, for a party that’s been in government for a decade? That life itself has got cheaper. And shorter,” he said.

“In his most recent report, Marmot set out the costs of inequality: that Covid got into the cracks and crevices of our society and forced them open with tragic consequences.”

Sir Keir said that although successive Conservative prime ministers have spoken of “northern powerhouses”, “burning injustices” or “levelling up, it never added up to more than soundbites and photo opportunities.

“The truth is, whoever their prime minister is, the Conservatives simply don’t believe that it’s the role of government to tackle inequality or insecurity. They believe a good government is one that gets out of the way, rather than builds the path to a more secure future,” he said.

“You can get away with that in the short-term, perhaps even for a few years, but after a decade the results are obvious. And so the mistakes the Conservatives are making today are the mistakes they always make.”

Sir Keir said he would offer start-up loans to 100,000 businesses and introduce a new British Recovery Bond to raise billions to invest in local communities and in “science, skills, technology and British manufacturing”. He said later that the money raised could be used for any purpose and that the bond would offer security for savers and give people a chance to invest in the country’s future.

“Keir Starmer said this speech would deliver his big vision for the future of the country, a ‘policy blitz’ with ideas to rival Beveridge and relaunch his failing leadership. But there are only two new policies – one taken from the Conservatives and the other from the Centre for Policy Studies, the think tank co-founded by Margaret Thatcher, ” the party’s co-chairman Amanda Milling said.

“After 10 months of Keir Starmer all Labour has to offer is others’ ideas, empty rhetoric and calling for things the government is already doing.”