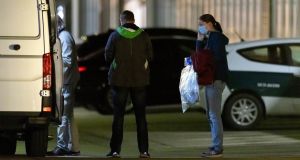 Police officers in front of a Lidl store in Neckarsulm, Germany. No motive has yet been identified for the attack. Photograph: EPA

German supermarket chain Lidl has said it is in “shock” after a letter bomb exploded at its headquarters in southern Germany.

Three people were injured, one seriously, when the package was opened at the company’s main administrative building in Neckarsulm, an hour north of Stuttgart, on Wednesday.

Police say it may have been one in a series of suspicious packages delivered this week in the area, including one to a local factory producing the Capri Sun juice drink.

About 100 employees were evacuated from Lidl’s headquarters after the letter-bomb explosion and a helicopter ambulance was seen in the car park. Local media reported that police investigators worked at the scene of the explosion into the evening.

Neckarsulm mayor Steffen Hertwig urged local post office staff, as well as locals, to be particularly vigilant about packages in the coming days.

“Above all packages with no sender or are conspicuous in any way, please be particularly careful,” he said.

Police spokesman Gerald Olma from the nearby city of Heilbronn said on Thursday there was still no obvious motive for the attack but that forensic specialists were examining what remained of the package.

The company said in a statement: “We are deeply shocked by the event and wish our employees a good and speedy recovery.”

Lidl ordered employees at its southern German base to remain at home until further notice, a recommendation that was also issued for a local training campus with links to Lidl’s 81-year-old founder Dieter Schwarz.

Mr Schwarz is known as “the phantom” in Germany for his spectacularly low profile, and guesstimates about the scale of his fortune go as high as €41.5 billion. The main source of his wealth is the Lidl discount chain he founded in 1973, which operates today in 32 countries with nearly 11,000 stores.

Another chain in the group called Kaufland, with larger stores and a wider product range, operates about 1,300 stores in central Europe.

Executives who have worked with Mr Schwarz say his main ambition was to imitate the Aldi supermarket chain and overtake it, which his retail group has now achieved.

Measured by its annual turnover of €104 billion, the Schwarz Group is the third-largest company in Germany. The Schwarz family’s retail genes stretch back to 1930 and the fruit import business of Dieter’s father.

Lidl is no stranger to targeting by criminals. In 2017 a German court sentenced two men to prison sentences after they threatened to poison food in Lidl stores unless the firm paid €5 million. To prove they were serious, the two men added pesticide to chocolate spread, toothpaste and gingerbread products and slipped them on to the shelves in three locations.

The sentencing judge said the two men had gotten their pesticide dosages wrong: “You’d have had to eat a tonne of gingerbread to even notice anything.”

The Schwarz group is privately owned and just a handful of pictures are known to exist of its founder, who withdrew from day-to-day management of the firm in 1999.

Keeping a low profile is something Mr Schwarz learned from Theo Albrecht, a co-founder of Aldi. In 1971 Albrecht was kidnapped on his way home from work and only released after 17 days when his wife paid a seven million Deutsche Mark (€3.5 million) ransom.

His kidnappers were later arrested and nearly half the ransom recovered. Later Mr Albrecht won a court battle with the tax authorities for the right to write off the ransom as a legitimate business expense.