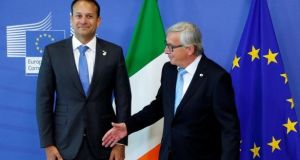 Leo Varadkar has dismissed reports that the EU will make support for Ireland’s Brexit position conditional on the State dropping opposition to corporate tax reform.

The Taoiseach told Labour leader Brendan Howlin that such a report was not coming from the European Commission or Government buildings.

He said he could “absolutely guarantee” that EU support for Ireland’s position was “rock solid”.

Mr Howlin referred to a Bloomberg report on Tuesday that support would be based on Ireland accepting corporate tax changes.

The Wexford TD said during Taoiseach’s questions in the Dáil that “Bloomberg also quoted an alleged European Commission official saying that solidarity does not come for free”.

Mr Howlin warned that “this is the sort of brinkmanship and last-minute concern that people would have if the Irish matters are not settled well in advance of the final withdrawal agreement being negotiated at the last hour”.

In June, European Commission president Jean-Claude Juncker urged Ireland to drop opposition to a new EU tax regime for the digital sector, which includes a charge levied on some digital sales as a short-term measure.

The Taoiseach told Mr Howlin there was a lot of “briefing going on”.

He said “not that long ago I read in one newspaper that the French president, Emmanuel Macron, was so impressed by the meeting he had with the British prime minister in the Riviera that he changed his position and France would suddenly do a deal with the UK.

“I read another story several days later saying much the same about Germany. I am forever reading this stuff. I can absolutely guarantee the Deputy that EU solidarity behind Ireland, the 27 member states supporting us as a country that is staying in the European Union, is absolutely solid.”

Mr Varadkar said that some of what Mr Howlin was reading in newspapers, particularly British-owned papers, “are very far off the mark when it comes to the reality of what is going on in these negotiations”.

He said the draft withdrawal agreement provides protection of the common travel area, a transition period to allow businesses and others to adjust to any permanent changes in trade, guarantees on citizens’ rights, particularly in Northern Ireland, and the backstop. This “guarantees us that there will be no hard border on the island of Ireland. These remain our objectives and that is what we will negotiate towards,” the Taoiseach said.

He stressed that both Ireland and Britain wanted the common travel area to remain in place and it was a bilateral issue.

The Taoiseach also said the Government wanted the transition period to run until the end of 2020 “which means that no changes would take effect until January 2021”.

He said the UK would leave the EU and that meant leaving the single market and customs union.

“Therefore, as things stand, we are planning for a situation in 2021 where there will need to be east-west checks and controls, though not between Northern Ireland and the Republic of Ireland.”

He said preparations were under way and the Government was employing 1,000 extra staff on a phased basis, including 270 customs staff next year.

He said “it would apply to the extent that is necessary to avoid a hard border and to continue to protect the all-island economy as it now works.”

1 Miriam Lord: Government’s latest comedy of errors offers little to laugh about
2 How one couple’s weekend away resulted in 30 Covid-19 cases
3 Taoiseach tells TD to ‘cop on’ over criticism of contact tracers asking about pubs
4 Coronavirus: 429 new cases as vigilance urged amid rises across the country
5 North: 424 new cases of coronavirus in highest rate since start of pandemic
Real news has value SUBSCRIBE