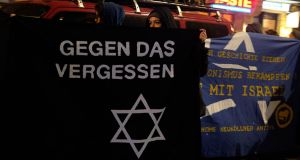 A demonstration in Berlin in support of the victims of anti-Semitism. Photograph: Lorena de la Cuesta/SOPA Images/ LightRocket via Getty Images

As Israel celebrates its 70th birthday, the country behind the genocide that led to the Jewish state’s foundation finds itself gripped by a wave of high-profile anti-Semitic attacks.

What makes the outrage in Germany all the greater: the attacks – in the middle of the day, in central Berlin – were filmed and uploaded to social media.

The latest attack on Wednesday evening began as an experiment by a 21-year-old Israeli living in Berlin. Adam Armoush is neither Jewish nor religious and grew up in an Israeli Arab family. On a recent trip home to Israel, a friend gifted him a kippa, the traditional head covering for Jewish men, but warned it wasn’t safe to wear it openly in Germany.

“I said it was really safe and I wanted to prove it but it ended like this,” he said.

With a friend, also wearing a kippa, he walked through the eastern neighbourhood of Prenzlauer Berg on Wednesday evening when he was approached by three young men who started shouting at them in Arabic.

“One got aggressive and ran to me with his belt,” he said, a scene he captured on his phone before the three men fled on foot.

The latest attack has shocked Berliners, particularly in the prosperous Prenzlauer Berg district, home to an Orthodox Jewish community and synagogue.

Mike Samuel Delberg, a senior member of Berlin’s Jewish community, urged police to “go after the perpetrator with the full force of the law”.

On Thursday evening the police said one of the alleged perpetrators presented himself: a 19-year-old Syrian man.

His identity has started another round of debate over whether Germany didn’t just open its doors to more than one million refugees in 2015-2016, but many people from countries where anti-Semitism and anti-Israeli feeling are normal.

A new book by Israeli political scientist David Ranan documents the scale of anti-Semitic feeling among new arrivals, but also among German Muslims.

An 18-year-old German-Turkish student told him, erroneously, that “all the big brands are Jewish”: from Nestlé and Aldi to McDonald’s, Coca Cola and Starbucks.

A 40-year-old academic suggested: “I don’t think that the leader of China is a Jew, or in Russia, but that’s it.”

Aiman Mazyek, head of Berlin’s largest Muslim association, said the attacks had made him “furious”.

“For years we have carried out educational trips for migrants to concentration camp memorials,” he said. “As a Muslim religious group we see a responsibility for this and a great need to keep it up.”

According to official statistics, Germany had four registered anti-Semitic crimes a day last year, similar to the numbers in 2016 but a marked rise on 2015. Organisations that monitor anti-Semitic incidents say many more attacks are never registered.

Chancellor Angela Merkel called for a “determined stand against all form of anti-Semitism”. Foreign minister Heiko Maas said it was “shameful” that Jews were being attacked on German streets, days after a music prize was awarded to a rap duo boasting of having “bodies more defined than Auschwitz prisoners”.

Many Jews in Germany see a problem in imported refugee intolerance but are even more worried by a native anti-Semitism that has spotted its moment to resurface.

Last December Yorai Feinberg, an Israeli restaurant owner in western Berlin, was verbally attacked by a German man as he stood outside having a smoke.

Feinberg’s girlfriend filmed the attack and posted it online. Though they received a huge groundswell of outraged support, the restaurant owner says he is bombarded daily now with threatening phone calls, promising to send them to gas chambers.

“It’s become unbearable,” said Feinberg. “If things go on like this we can’t live here anymore.”

Adam Armoush, who hopes to become a vet and speaks fluent German, is not sure what to make of his experience in his adoptive home.

“Many people just stood around and looked and that is very sad,” he said. “I grew up among Jews and all my friends in Israel are Jews, so this is personal.”

1 Coronavirus: What will reopen in Ireland’s phases to ease restrictions?
2 Next government could bring in work-from-home tax incentives – Taoiseach
3 Swimming ban at Dublin's Merrion strand due to poor water quality
4 Coronavirus: No new Covid-19 deaths reported in State for first time since March
5 Unconvincing account may take some heat out of Dominic Cummings controversy
Real news has value SUBSCRIBE