Move aims to bolster safety from retaliation for employees across union 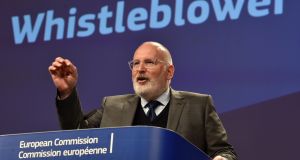 European Commission vice-president Frans Timmermans: “There should be no punishment for doing the right thing.” Photograph: Eric Vidal/Reuters

Legal protection for whistleblowers in the state and private sectors akin to Irish legislation is to be extended throughout the EU, the European Commission has proposed in a draft directive.

Arguing that recent scandals such as Dieselgate, Luxleaks, the Panama Papers or the ongoing Cambridge Analytica revelations show that whistleblowers can play an important role in uncovering damaging unlawful activities, the commission points out that protection against retaliation for employees is currently very patchy across the union.

“Many recent scandals may never have come to light if insiders hadn’t had the courage to speak out,” first vice-president Frans Timmermans told journalists. “But those who did took enormous risks.

“So if we better protect whistleblowers, we can better detect and prevent harm to the public interest such as fraud, corruption, corporate tax avoidance or damage to people’s health and the environment. There should be no punishment for doing the right thing.”

The commission cites survey evidence that many whistleblowers pay for their action with their jobs, their reputation or even their health: 36 per cent of workers who reported misconduct experienced retaliation, according to the 2016 Global Business Ethics Survey.

Mr Timmermans said the new measures would establish safe channels for reporting both within an organisation and to public authorities, and protect whistleblowers against dismissal, demotion and other forms of retaliation. They will also help uphold freedom of expression and freedom of the media and the work of investigative journalists, he said.

But those who make disclosures to journalists will be legally protected only if they have already attempted to make the revelations first through internal mechanisms or, where appropriate, to designated bodies such as industry regulators.

Companies with more than 50 employees or with an annual turnover of more than €10 million will have to set up an internal procedure to handle whistleblowers’ reports. All state, regional administrations and municipalities with more than 10,000 inhabitants will also be covered by the new law.

There will be a requirement to respond to allegations within three months, and the legal onus will be on employers to show that any sanctioning of an employee has not been the result of his/her whistleblowing.

Only 10 EU member states currently ensure that whistleblowers are fully protected. Broadly similar provisions were introduced in Ireland in the Protected Disclosures Act, which came into effect in 2014.

The NGO Transparency International welcomed the commission proposals but remains critical of the Irish legislation’s failure, unlike the directive, to extend protection to volunteers and students. And the group wants Irish law to reverse the burden of proof to employers to show they were not responsible for the penalisation of a whistleblower.

1 Coronavirus: Republic reports 14 further deaths and 212 new cases
2 Tony Holohan admitted to hospital after feeling unwell during coronavirus briefing
3 ‘On the bike I meet no one’: 78-year-old cyclist refuses to cocoon
4 ‘Everyone still thinks it’s a joke’ - parents of toddler with coronavirus speak out
5 Ten women who attended Dublin maternity hospital tested positive for coronavirus
Real news has value SUBSCRIBE