Kate, Duchess of Cambridge, has given birth to third child, fifth-in-line as heir to throne 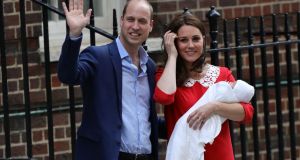 The Duke and Duchess of Cambridge and their newborn son outside the Lindo Wing at St Mary’s Hospital in Paddington, London. Photograph: Aaron Chown/PA

Britain’s Duchess of Cambridge has given birth to a son weighing 8lbs 7oz, Kensington Palace has announced.

Kate, the wife of Britain’s prince William, was admitted to hospital in the early stages of labour on Monday to give birth to the couple’s third child.

The Duke and Duchess of Cambridge, as the couple are officially known, drove from their home at Kensington Palace in central London to St Mary’s Hospital in west London where their other two children, George and Charlotte, were also born.

“The Duchess of Cambridge was admitted to St. Mary’s Hospital, Paddington, London, earlier this morning in the early stages of labour,” Kensington Palace said in a statement.

The new baby will be Queen Elizabeth’s sixth great-grandchild and fifth-in-line to the British throne behind siblings Prince George (4), his two-year-old sister Princess Charlotte, their father William, and grandfather and heir Prince Charles.

William’s younger brother Harry, who marries US actress Meghan Markle next month, will fall to sixth on the list.

As with her two previous pregnancies, Kate (36), suffered from hyperemesis gravidarum, an extreme form of morning sickness which can cause severe nausea and vomiting and requires supplementary hydration and nutrients.

Kate’s last engagement ahead of the birth was on March 22nd when she and William attended a number of events in London to celebrate the Commonwealth ahead of a meeting of its leaders last week.

Mary, Alice, and Victoria are among the favourite names with bookmakers if the baby is a girl, while Albert, Arthur and Fred are the favourites for a boy.

The baby will be born at the private Lindo wing of St Mary’s, where maternity packages cost in the region of £6,000 pounds . William (35) was born at the same hospital to the late Princess Diana in 1982.

In keeping with tradition, the official announcement of the birth will be made by placing a notice on an easel in the forecourt of the queen’s London home, Buckingham Palace.

William and Kate met as students at St Andrews University in Scotland. They got married in a pageant-packed ceremony at Westminster Abbey in April 2011 and have since become well-known across the global stage.

Having had homes in north Wales and Norfolk in eastern England, William and Kate now live at Kensington Palace to allow the prince to dedicate more time to royal duties on behalf of his grandmother.

Last year William gave up his day job as an air ambulance pilot to concentrate on his official role, having faced some criticism from British newspapers who dubbed him “workshy Wills”.

However, he has also been determined to play a hands-on role in bringing up his children while also protecting their privacy, an issue close to his heart after his mother’s death in a 1997 Paris car crash as her limousine sped away from chasing paparazzi.

“I think he takes on a lot more engagements than he used to,” said royal biographer Claudia Joseph.

“But compared to members of the general public who have full-time jobs, he still has some time off to look after the children, to give them their baths, to put them to bed and I think he’ll continue to do that,” Joseph said.

The British royals are rarely out of the media glare, but the baby arrives at a time when the Windsors have particularly been in the limelight.

On Saturday William joined the queen and other senior royals, with the exception of Kate, as the monarch celebrated her 92nd birthday at a televised concert.

The queen also played a prominent role at the Commonwealth Heads of Government meeting in London last week, where it was announced that Charles would succeed her as head of the network of mainly former British colonies.

The wedding of William and Kate and the birth of George, who is destined to be a future king, generated a worldwide media frenzy. While interest in their third child has been more muted, large numbers of photographers and broadcasters were massing outside the hospital in anticipation of the new royal arrival, along with some dedicated royal fans.

“We’ve been camped here outside the hospital for 15 days,” said John Loughrey (63), from south London, who was wearing a Union Jack onesie and hat and holding a baby doll adorned with a crown that said ‘feed me mummy’ every few seconds.

“We’ve been coming out doing this for 21 years. We were here for George and Charlotte and we’ll be there for the royal wedding too,” he said, referring to Harry and Meghan Markle.

The birth will give Kate’s own family another cause for celebration after it was reported by British media on Sunday that her sister Pippa was pregnant with her first child. – Reuters