US move on capital punishment poses new challenge for Democrats

America Letter: Election candidates opposing death penalty may be out of step with public opinion 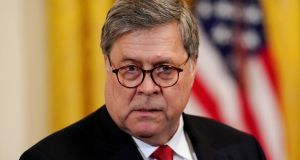 US attorney general William Barr, who has announced the reinstatement of capital punishment by the US federal government. Photograph: Yuri Gripas/Reuters

US attorney general William Barr may be best known for his role as Robert Mueller’s chief antagonist during the Russia investigation, but this week he was making headlines for another reason.

On Thursday Barr announced that the US federal government would reintroduce capital punishment after a hiatus of 16 years.

While some individual states have continued to carry out executions, the last execution at a federal level took place in 2003.

In 2014 then president Barack Obama ordered the justice department to undertake a review of capital punishment policy after a botched execution in Oklahoma. During that execution – which gained national attention – the 38-year-old inmate was seen writhing, and the process was halted, though the prisoner died of a heart attack soon after. In particular, the incident renewed focus on the lethal drugs used in the procedure.

But on Thursday, the Department of Justice announced it would be resuming executions. “The justice department upholds the rule of law – and we owe it to the victims and their families to carry forward the sentence imposed by our justice system,” Barr said.

Five death row inmates have already been identified as the first in line, and executions will begin in December. All are in prison for the murder, and in some cases rape, of children. Barr also ordered the Bureau of Prisons to change the kind of lethal injections it uses, to closely mirror those used in Georgia, Missouri and Texas.

The development has refocused attention on an issue that has not been high on the agenda of late, despite the fact that Barr’s predecessor, Jeff Sessions, ordered officials to examine whether the policy could be introduced early on in the Trump presidency.

The decision by the Trump administration to announce the change in policy now could be read as an attempt to court conservative voters ahead of next year’s presidential election – an election that will be fought on ideological grounds.

But it has also pushed the issue front and centre in the Democratic primary campaign. The announcement came days after Democratic frontrunner Joe Biden published his criminal justice policy plan in which he set out his opposition to the death penalty – a sharp reversal in course by the former vice president.

As a senator in 1992 he strongly advocated for a crime bill that would result in the more frequent use of the death penalty. He set out the reason behind his change of heart in his statement on Tuesday.

Noting that 160 people who were sentenced to death since 1973 were subsequently exonerated, his campaign team said: “Because we cannot ensure we get death penalty cases right every time, Biden will work to pass legislation to eliminate the death penalty at the federal level, and incentivise states to follow the federal government’s example. These individuals should instead serve life sentences without probation or parole”.

Other candidates in the primary contest have also stated their opposition. Kamala Harris, who has been criticised by some for her harsh approach to law enforcement while a prosecutor and attorney general in California, described capital punishment as “immoral and deeply flawed” and criticised the justice department’s move on Thursday to reinstate it at federal level.

“Too many innocent people have been put to death,” she said. “We need a national moratorium on the death penalty, not a resurrection.”

Other candidates issued similar statements – at least 14 of the main contenders for the Democratic nomination oppose capital punishment.

While this is not inconsistent with Democratic policy – the party has been moving increasingly leftward on the issue, making opposition to capital punishment a formal part of its policy platform in 2016 for the first time – it could be a politically risky strategy in terms of the national electorate.

While opposition to the death penalty in America is at its highest point in 50 years according to a recent Gallup poll,  the majority of Americans – 56 per cent – still support it.

The United States’s stance on the issue, making it an outlier in the developed world, continues to perplex its allies in the West. Opposition to the death penalty is a key policy priority for the European Union in its dealings with the United States through its mission in Washington.

The recently-appointed EU special representative on human rights, Eamon Gilmore, raised the issue with US officials earlier this month in his first official visit to Washington since his appointment. But it is unlikely that international pressure will do anything to sway US officials, particularly under the current administration.