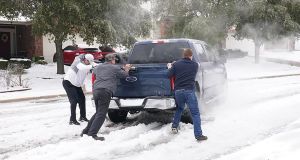 Residents help a pickup driver get out of ice on the road in Round Rock, Texas, after a winter storm. Photograph: Suzanne Cordeiroo/AFP via Getty Images

Climate and energy policies moved to the top of the agenda in the United States this week as vast swathes of the country were hit by a severe cold snap.

In Texas, a state more known for its sweltering summers, desert landscapes and ubiquitous cacti plants, temperatures plunged as low as minus 18 degrees.

For Michael Sofranko, a writer and creative writing professor in Houston, things began to go wrong in the early hours of Monday morning. “We have had no electricity or heat in my house for three days, and we still have no water,” he told The Irish Times from his Houston home on Thursday.

He made an early decision to turn off his water mains and drain all the pipes in the house before the cold front set in. It proved to be a wise decision. Of the 60 homes in his vicinity, all but 12 have been flooded by burst pipes. He sees himself as one of the lucky ones – some older, poorer residents of the city have died.

Other Houston residents had a different experience. Ted Cruz, who represents Texas in the Senate, warned his constituents about the severity of the storm in a radio interview on Monday. “Don’t risk it. Keep your family safe and just stay home and hug your kids,” he said.

Two days later he was on a flight to Mexico. Following uproar he booked a return flight the following day, telling reporters who met him at Cancún airport that he had simply escorted his daughters there because he wanted to be “a good dad”.

By the time he arrived at his home in Houston on Thursday night he admitted that he had initially planned to stay in Mexico until the weekend. His change of story was no doubt prompted by a New York Times report of leaked text messages from his wife Heidi encouraging neighbours to join them in the Ritz Carlton in Cancún.

“Flyin’ Ted”, as he has now been dubbed in a reworking of the “Lyin’ Ted” moniker coined by Donald Trump during the 2016 Republican primaries, has faced calls to resign from furious Texans.

This week’s weather events have caused hardship for millions of Americans who have been left without electricity or water. Power interruptions began on Sunday, a day after the Arctic blast hit states like Texas, Oklahoma, Mississippi and Louisiana.

In Texas, the number of homes and businesses without power peaked at 4.5 million, with millions more left without clean water. Some hospitals faced a dire situation as they lost electricity and water, causing a total shutdown of some facilities.

The state’s Covid vaccination rollout stalled as the harsh weather conditions took hold, while vaccine supplies were also threatened. More than 8,000 doses almost went to waste after a storage facility lost power, but were ultimately administered to willing citizens or transferred to a nearby university.

Americans are demanding answers to what went wrong in Texas, the country’s second-largest state and one synonymous with the energy industry. A number of factors were at play.

Uniquely, Texas operates its own energy grid, independent of the rest of the country, with the result that it cannot tap the energy supplies of neighbouring states. The unexpected cold spell – temperatures reached their lowest level in more than 70 years – triggered a clash of supply and demand.

At the very point that demand for electricity went up, the supply of that energy came under pressure as gas pipes clogged up and wind turbines froze. A staggered wave of blackouts initiated by the entity that controls the grid, the ironically-named Electric Reliability Council of Texas (Ercot), was insufficient to get the energy supply back on track, leading to sustained power cuts.

The state’s Republican governor Greg Abbott blamed Ercot, and also took a shot at the renewable energy sector. He said that the crisis showed that the Democratic “Green New Deal” plan would never work in Texas, despite the fact that the majority of the state’s electricity is gas-generated.

In fact, Texas’s energy woes are more a reflection of a policy of massive deregulation and low consumer prices. Providers are not obliged to keep significant reserves, and there is no incentive to “winterise” energy infrastructure in a state more geared towards scorching summers.

As Texas confronts extreme weather patterns that are linked to climate change, the events of the last week have exposed the vulnerability of the state’s infrastructure. It is a question that America more broadly may need to confront in the coming years.