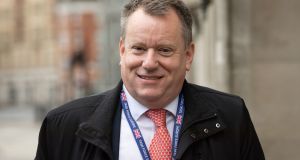 David Frost’s promotion to the cabinet marks the return of open factionalism to Downing Street after months of quieter manoeuvring following the sacking of Dominic Cummings last November. But it also heralds a more confrontational British approach to implementing its agreements with the European Union.

The former chief Brexit negotiator was due to have taken up the post of national security adviser this month but he had no background in security and the job offer was withdrawn at the last minute. He was instead named as Boris Johnson’s “Representative on Brexit and International Policy” with his own policy unit in No 10.

The retired diplomat and former Scotch whisky salesman had no policy of his own to influence, however, with cabinet office minister Michael Gove the main interlocutor with the EU on Brexit and historian John Bew far advanced in his review of Britain’s foreign and defence policy.

Frost’s unhappiness in his role and its lack of status appears to have boiled over this week after two Gove allies, Simone Finn and Henry Newman, arrived in Downing Street as deputy chief of staff and senior adviser respectively. Finn and Newman are also longstanding friends of Johnson’s fiancée Carrie Symonds, whom the Vote Leave faction blame for their banishment from court.

Before the prime minister turned on Cummings, Vote Leave were the dominant faction in Downing Street alongside a less noisy group of old Johnson retainers from his days as London mayor and from Westminster.

Cummings controlled access to the prime minister and director of communications Lee Cain controlled the message with a rough and ready style of dealing with journalists. The Vote Leave faction in No 10 is now reduced to a remnant that scarcely extends beyond Frost and his fellow Brexit negotiator Oliver Lewis, who has recently taken over the Union unit charged with preventing Scottish independence.

Cummings was replaced as chief of staff by former treasury official and Goldman Sachs banker Dan Rosenfield who has, along with cabinet secretary Simon Case, restored bureaucratic order to Downing Street. But with the Vote Leave faction vanquished and the old retainers weakened by the departure of their most senior figure Eddie Lister as special envoy in the Gulf, a political vacuum opened up.

This is now being filled by Finn, Newman and some other recent arrivals who are also associates of Gove or Symonds or both. It is unclear if Frost actually threatened to resign this week but his unhappiness was sufficient to persuade Johnson to bring him into cabinet with a new role in charge of Britain’s relationship with the EU.

He will replace Gove as co-chair of the UK-EU Partnership Committee that governs the implementation of the Trade and Cooperation Agreement and of the joint committee overseeing the implementation of the Northern Ireland protocol. Despite his occasionally overheated rhetoric, Gove has for the most part taken a conciliatory approach to his role in the joint committee, seeking to turn down the temperature in recent days after attempting to exploit the EU’s embarrassment over its article 16 debacle to win concessions.

Frost’s style is more confrontational and he, along with Lewis, championed last year’s British threat to break international law by reneging on the protocol in the internal market Bill. The EU’s member states have made clear that they have no appetite for renegotiating the protocol or granting sweeping waivers, so there could be trouble ahead when Frost takes over those negotiations.

Each week that passes reveals a fresh deficiency in the Trade and Cooperation Agreement Frost negotiated with the EU, as one sector after another wakes up to its devastating consequences for their business. Frost is unlikely to admit that his deal left large parts of the British economy exposed to greater costs and higher bureaucratic hurdles in doing business with Europe and he is ideologically unable to agree to the kind of alignment of rules that could overcome some of the problems.

Ivan Rogers, Britain’s former ambassador to the EU, believes that Frost’s appointment means that Johnson will not concede to any demands from business to change the deal.

“There is still an expectation of ‘well they can’t really have wanted that’ and ‘they can’t really have realised that this was the true implication for our sector so if we go and lobby them now and demonstrate to them what’s happening on the ground as a consequence of the deal they negotiated, they must want to rejig it, refine it, and reopen the negotiation in 2021’. I suppose in shorthand my advice is: don’t believe it guys. We are where we are,” he told the EU-UK Forum on Thursday.

“There’s no new negotiation to be had. There’s no appetite on either side of the table to reopen it. I don’t think that’s where David Frost or his boss will be or will want to be. I think that you should get on with life and face the shock.”