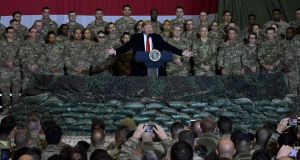 The partial withdrawal of US troops from Afghanistan, which was completed on Friday, is a landmine the outgoing Trump administration has left for its successor.

Ordered by President Donald Trump, who had pledged to end “America’s forever wars”, the withdrawal reduces the US deployment from 4,500 to 2,500, opening the door to a return to Taliban rule, 19 years after the movement was ousted by the United States.

An unidentified US defence official told Reuters last week that about 3,000 US troops remain. Since this residual force is too small to counter and contain the Taliban, incoming president Joe Biden could be compelled to make the domestically unpopular decision to redeploy to Afghanistan thousands of US troops to prevent a Taliban takeover.

Opposition in the US military to Trump’s withdrawal plan prompted him to fire defence secretary Mark Esper and senior military commanders last November and replace them with officials and officers who do the president’s bidding.

This month Trump pre-empted a last-ditch attempt by Congress to maintain 4,000 troops in Afghanistan until the Pentagon produced a risk assessment on withdrawals.

The troop reduction has taken place under the peace deal reached last February by the US and the Taliban. It specifies that all US and Nato troops would fully withdraw by May 2021 if the Taliban halts attacks on foreign forces and bars jihadis from operating in areas under its control.

The prohibition against al-Qaeda is crucial for the US as it occupied Afghanistan to topple the Taliban and uproot al-Qaeda after it mounted strikes on New York and Washington on September 11th, 2001.

Ongoing Qatari-hosted negotiations between the Taliban and the Afghan government meant to end the civil war have made little progress. This is largely because the US has failed to establish an effective Afghan defence force and a government capable of ruling Afghanistan once the US military leaves.

Consequently, the Taliban, which continues to attack government forces, is in a strong position. It holds about two-thirds of the country, is better financed than the Afghan government and military, and Taliban fighters are well armed and strongly motivated.

Without US military support, the US-trained and armed Afghan army is no match for Taliban forces while the US-sponsored Afghan government is weak and divided.

In the areas it controls the Sunni Taliban imposes its strict interpretation of Islamic practice and law, suppresses women, curtails education, restricts the freedoms of expression and movement, attacks non-Sunni minorities, and imprisons, tortures and executes dissidents. During talks with the government, the Taliban insists on an “Islamic government” for Afghanistan.

Afghanistan’s situation mirrors the experience of Iraq, which was occupied by the US in 2003. There, the US replaced the army with a poorly trained sectarian force riddled with corruption which could not prevent Islamic State, al-Qaeda’s offshoot, from conquering 40 per cent of the country.

Despite its defeat by combined US-led and Iraqi army and militia forces in 2018, Islamic State is resurgent. Nevertheless, Trump has also ordered US troops in Iraq to downsize to 2,500.