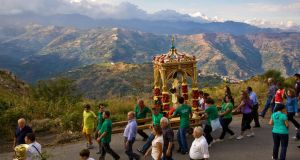 A religious procession in Roccafiorita, Sicily. The average age of its 187 inhabitants is over 60 and the worry is that if Covid spread among its population, the village might disappear. Photograph: Riccardo Lombardo/Getty Images

When the mayor of Roccafiorita received a phone call in October informing him that an employee in his office had tested positive for Covid-19, his heart sank.

Set among the forests at the foot of Mount Kalfa, Roccafiorita is the smallest village in southern Italy. The average age of its 187 inhabitants is over 60. If Covid were to spread among the population, the village could disappear.

“When the phone rang, it was like lightning on a sunny day,” said Concetto Orlando, the mayor. “With this second wave on its way, for a second I thought that we might actually be wiped off the map.”

Last week, the Italian government introduced a semi-lockdown to combat the spread of coronavirus, after an average of over 30,000 new cases a day. Most attention has been directed towards large cities like Milan and Naples, but across the country thousands of small villages are fighting to stay alive.

Of Italy’s 8,000 villages, towns and cities, almost 70 per cent have fewer than 5,000 inhabitants. Two thousand have fewer than 1,000 inhabitants, and in some places the birth of a baby is so rare that the village bells toll to celebrate the news. Dozens of these villages have been declared coronavirus “red zones” – meaning the risk of infection is particularly high and people cannot leave or enter.

“Demographic desertification had already affected these towns before Covid,” said Mario Alvano, secretary general of the National Association of Italian Municipalities in Sicily. “These are tiny villages that were already destined to become ghost towns in a few decades, where the birth rate is 30 times lower than the death rate. Now Covid risks accelerating their demise.”

Salvatore Occhino, born and raised in Roccafiorita, may never have imagined that after the second World War another terrifying experience would be in store for him, this time in the shape of a pandemic. Occhino is a living monument in the town, not only because at 93 he is its oldest person, but above all because despite his age, he continues to tend to his fields.

“I’m worried,” he said. “If Covid strikes hard, there will be no one left in Roccafiorita. My heart cries out when I think of all the sacrifices we’ve made to keep this village alive. Now we can only place ourselves in the Lord’s hands.”

In at least four regions, Covid-19 has struck small villages, including Galati Mamertino in Sicily, which was designated a red zone on November 1st after 157 of its 2,400 inhabitants tested positive. Experts agree that outbreaks of this sort are the result of the close proximity among townspeople, which is typical of social life in these areas.

In 2020, three people died and one child was born in Roccafiorita

“In tiny villages, relations among relatives and friends are intense,” said Tullio Prestileo, a doctor of infectious diseases at the Benfratelli hospital in Palermo. “Here the impression that a friend or relative can infect us is much lower than in large cities. It’s often believed that the isolated location of these villages is itself a form of protection against transmission, and that the problem is an urban one. That’s why when an outbreak occurs in these towns, the transmission is more widespread.”

After the second World War, Roccafiorita began a trend of depopulation as many of its inhabitants left for the US in search of employment. In 2020, three people died and one child was born in Roccafiorita.

The phenomenon is not limited to rural areas – births nationwide are at an all-time low since the unification of Italy. For the first time in 90 years, the Italian population (excluding the foreign population) has fallen to about 55 million, according to the national statistics agency.

Globally, Italy ranks behind only Japan in the proportion of older people among the general population. The result has been a rise in the number of ghost towns, where the majority of homes are abandoned. In Roccafiorita, 40 per cent of homes are uninhabited.

Over the years, in an attempt to resuscitate these small towns, mayors have adopted various strategies. Some villages have opened the doors of vacant houses to asylum seekers. Others are practically giving away abandoned homes to anyone who wants to move in.

Last year, the mayor of Sambuca – population 5,000 – received more than 94,000 emails from around the world after publicly announcing the sale of abandoned homes for €1. Sambuca, in the province of Agrigento, has just been declared a “red zone”, after an outbreak caused 130 positive cases and eight deaths.

“The sale of our homes for €1 was a symbolic gesture to bring people back to Sambuca, because villages are made of people, not houses,” said the deputy mayor, Giuseppe Cacioppo. “Believe me, the loss of one person in an ageing, small town is felt more deeply here than in the cities.”

“The death of one our own isn’t just a number,” said Fabio Orlando, the chairman of the city council in Roccafiorita. “It’s a loss of history, a house that becomes abandoned, and a pathway that is closed and forgotten forever.”

Fortunately the threat of an outbreak in Roccafiorita has been averted, for now. A recent round of swab tests carried out on the entire population all came back negative.

On November 4th, Rome designated Sicily as an “orange zone”, at high risk, mainly because of the lack of health facilities and beds in intensive-care units. The small towns have paid the highest price for cost-cutting in the health system in the south, where more than 40 hospitals have closed in recent years.

The closest Covid hospital is more than 1 hour and 40 minutes from Roccafiorita.

From the perspective of the village, the light at the end of the tunnel seems far off. The village’s elderly inhabitants hope for a vaccine. But Salvatore Occhino knows a long and arduous winter lies ahead. He says it in his own way, in a recent poem. It’s about how Roccafiorita has changed, how the streets were once dark, and now they’re lit. It ends like this:

(“I now bid you all farewell, good evening. Those who survive we’ll see in spring”) – Guardian