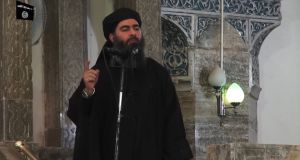 A file image from 2014 allegedly showing the leader of the Islamic State Abu Bakr al-Baghdadi who Donald Trump said on Sunday had died in a raid by US special forces. Photograph: AFP

The reported death of elusive Islamic State founder Abu Bakr al-Baghdadi in a US special forces raid in Syria amounts to a major public relations coup for the Trump administration rather than a significant blow to his movement.

Baghdadi has long topped Washington’s most wanted list, with a $25 million bounty offered for capturing or killing him.

Islamic State will survive without him. Its harsh, reactionary ideology - which is based on the beliefs of Saudi Arabia’s ultra-orthodox Wahhabi sect - appeals to angry young Muslims across the world who lack education, jobs, and decent futures.

The ideology is spread by mosque preachers, word of mouth, family members and friends and social media. If confirmed, his death could provoke retaliatory attacks by followers.

The claim by US, Kurdish and Syrian sources that he was killed in Syria’s north-western Idlib province near the Turkish border has puzzled regional experts. When last tracked, Baghdadi was said to be in hiding in south-eastern Syria or western Iraq.

In the latter area he could count on the support of Sunnis alienated due to persecution by the Shia fundamentalist-dominated regime in Baghdad.

Idlib would appear to be the last place he could hope to find sanctuary. The province is currently ruled by al-Qaeda affiliate Hay’at Tahrir al-Sham, the deadly rival of Baghdadi’s Islamic State.

It drove Jabhat al-Nusra, the earliest incarnation of Tahrir al-Sham, from the northern Syrian city of Raqqa, whichBaghdadi made his capital. Their fighters have subsequently fought over territory,recruits, and resources.

Baghdadi would also have been wary of hiding anywhere near the Turkish border. Ankara would have been delighted to have paraded him alive or dead andtaken credit for putting an end to his career.

Turkey has not been heavily involved in the war against Islamic State and has, instead, recruited its fighters to join battle against US-supported Syrian Kurds.

Islamic State has been regarded as a global menace since June 2014 when its forces established a radical, expansionist caliphate in northern Syria and Iraq and has inspired jihadi attacks across the world from the US and Europe in the West to Indonesia in the east and sub-Saharan Africa in the south.

At the peak of its power, Baghdadi’s caliphate occupied 30 per cent of Iraq and 25 per cent of Syria and imposed its iron-fisted rule over millions of people. Islamic State exploited Syria’s oil fields, sacked industrial parks in northern Syria, robbed banks and collected taxes, becoming the wealthiest terrorist group the world has ever seen.

Nevertheless, Baghdadi, who styled himself ‘Caliph Ibrahim,’ avoided the spotlight and appeared before chosen followers only once. This was in July 2014 in the 12th century Nuri Mosque in Mosul where he called on Muslims around the world to emigrate to his caliphate where they could dwell in an Islamic state and take part in a holy war against unbelievers. Some 41,000 foreign recruits from 80countries flocked to his appeal.

His followers destroyed the historic mosque before they were driven from the city by US and allied air strikes and Kurdish troops in 2017.

During the international campaign against Islamic state Baghdadi fled urban areas and went underground in the desert with loyal lieutenants.

He was wounded and his entourage was decimated during attacks on desert hideouts.

Later sightings of Baghdadi were on videos, the last appearing in April this year. He was shown sitting cross-legged on the floor of a room with a Kalashnikov.