Balkan leaders head for Brussels with EU hopes under a cloud 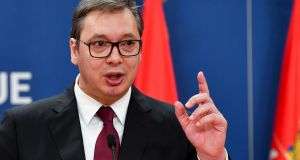 Balkan leaders have been invited to Brussels amid concern over their countries’ prospects for membership of the European Union, following the bloc’s decision not to launch accession talks with North Macedonia and Albania.

The meetings will focus on how the EU can re-energise its relationship with the Balkans after North Macedonia and Albania were left bitterly disappointed this month by French-led opposition to their longstanding request to start membership talks.

Mr Juncker and Ms Mogherini called the refusal “a historic mistake” on the part of EU members and warned that Balkan states are less likely to reform and fight crime and corruption if they feel that the doors to the bloc are closed.

The EU is also concerned that the setback could stoke political instability in the Balkans – and North Macedonia called snap elections in the wake of the EU decision – and prompt Russia and China to deepen their involvement in the region.

Serbia signed a free-trade deal last Friday with the Eurasian Economic Union, which is dominated by Russia and also includes Belarus, Armenia, Kazakhstan and Kyrgyzstan.

Serbia’s trade with those nations is worth a fraction of the value of its business with the EU, and the deal will have to be torn up if Serbia joins the European bloc, but the agreement highlighted Belgrade’s determination to balance its diplomatic, economic and security relations between Russia and the West.

Moscow has sent troops to take part in this month’s “Slavic Shield” military exercises in Serbia along with its cutting-edge S-400 and Pantsir air-defence systems, which are being used in war games outside Russia for the first time.

Mr Vucic announced that Serbia was buying a Pantsir system and, when inspecting the missiles in Belgrade on Friday, he said he was “thankful to our Russian friends for drastically boosting our defence capabilities”.

Moscow has supplied fighter jets, tanks and other armoured vehicles to Serbia in recent years, causing some disquiet among other Balkan countries.

“This is a matter for Serbia and Russia,” Nato told Radio Free Europe.

“Serbia is a Nato partner... and we respect Serbia’s right to make sovereign decisions about exercises on its territory,” the alliance said in a statement.

The EU will also use this week’s meetings to encourage Serbia and Kosovo to restart stalled talks on establishing normal relations, which are vital to their hopes of eventually joining the bloc.

“With negotiations at a standstill, both risk squandering the best chance in a generation to normalise relations,” said Matthew Palmer, the new US special envoy to the western Balkans.

In comments published on Friday, he told Voice of America that the EU decision on Albania and North Macedonia “sends exactly the wrong message to both Belgrade and Pristina. That message is, ‘You can do difficult things; you can make hard choices; you can compromise, and you can still be denied a path forward to Europe.’”