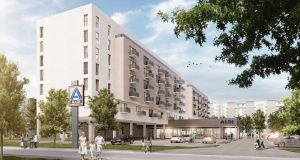 A computer-generated image showing an Aldi store on the ground floor of a residential building which will be built in Berlin, Germany. Image: Aldi Nord/EPA

If you thought the scramble for the Aldi chainsaws was a sight, wait until they launch their latest special offer.

The German discounter has announced plans to build some 2,000 apartments in Berlin over new stores – its contribution to solving a growing housing crisis in the capital.

Rather than renovate old, one-storey supermarkets it owns, often in prime locations, the retailer hopes to get planning permission for 30 blocks with larger stores on the ground floor and apartments above.

For the discount chain, the proposal solves two problems at once. With a population of 3.47 million, Berlin’s population is growing by 40,000 annually and forecast to grow 300,000 by 2030, putting a squeeze on both residential and commercial property.

“Of course we want to remain as a local supplier for our customers but, for that, we have to expand,” said Jörg Michalek, said head of property management at Aldi-Nord. “The combination of Aldi brands and linked residential space is a consequential and future-oriented solution.”

The supermarket will build and rent, but not sell, the 60sq m units. Almost a third will be made available as social housing at a rent of around €390 a month, excluding utilities. The rent in the other units will be around €600.

Berlin’s state government, struggling to meet its promises to deliver affordable housing, is delighted at the news and has signalled a sympathetic examination of the planning applications.

Aldi’s arch-rival Lidl is one step ahead in Ireland. Lidl already has flats above its store in Dublin’s Rathmines district and, this week, was granted planning permission for a development in Ballymun called “North Quarter”. As well as a Lidl store, it will include office space, car parking and two linked blocks of student accommodation with space for 364 beds, retail units and cafes.

The student blocks, a short cycle from Dublin City University, will be range between six- and 10-stories high.

According to Lidl property director Alan Barry, the units will “help satisfy some of the huge demand for purpose-built student residences”.

Germany’s Aldi apartments are part of a €5 billion modernisation drive at Aldi-Nord, the company that trades in the northern half of Germany. It is a welcome positive headline after a bitter legal battle for money and influence among heirs of founder Theo Albrecht.

A spokesman for Aldi-Ireland did not return a request for comment about possible apartment plans in Dublin.

Aldi’s Irish and British stores are operated by Aldi-Süd. It trades in southern Germany, as a separate company to Aldi-Nord.

In 1961 Aldi founding brothers Karl and Theodor Albrecht drew a so-called “Aldi equator”, dividing Germany – and later foreign subsidiaries – into two trading areas. The reported reason for the split: the men couldn’t agree on whether or not to sell cigarettes.