America Letter: One hundred years ago a tour failed to co-opt official America to Ireland’s cause 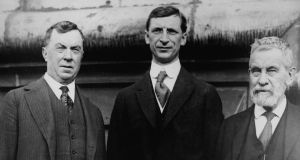 As Ireland continues to mark various centenaries connected to the struggle for independence, this month marks the 100-year anniversary of an important moment in Irish-US relations.

In June 1919, Éamon de Valera arrived in the United States for what was to be an 18-month visit. He had recently escaped from Lincoln jail in England in sensational fashion, after a duplicate key was smuggled into the jail in a cake and he escaped dressed as a woman.

A few months later he was a stowaway aboard the SS Lapland from Liverpool bound for America.

De Valera’s plan was to secure recognition for the emerging Irish nation, tap into the huge Irish-American community for funds, and to pressurise the US government to take a stance on Irish independence. Playing on his mind was the upcoming Versailles conference where the nascent League of Nations was preparing to guarantee “existing international borders” – a provision that would imply Ireland remaining within the United Kingdom.

De Valera also had a challenge in winning over President Woodrow Wilson, who was less than sympathetic to Ireland’s cause.

De Valera’s interest in America was of course personal. He was born in New York in 1882 and his US citizenship was one of the reasons he was spared execution after the 1916 rising.

At first Dev kept a low profile in America. Though he was greeted by Harry Boland and others when he docked in New York, he first went to Philadelphia and stayed with Joseph McGarrity, the Tyrone-born leader of Clan na Gael and a well-known figure in Irish America. He also quietly paid a visit to his mother in Rochester, upstate New York.

De Valera’s first major engagement was on June 23rd when he was unveiled to the American public at a press conference in the Waldorf-Astoria hotel in New York. Crowds thronged the streets around the hotel, and De Valera proclaimed: “I am in America as the official head of the Republic established by the will of the Irish people in accordance with the principle of self-determination.”

He then embarked upon a tour across America. Vast crowds turned out to see the self-proclaimed “president of the Irish republic”. In Boston an estimated crowd of 70,000 people heard him talk in Fenway Park; in San Francisco he unveiled a statute of Irish revolutionary hero Robert Emmet in Golden Gate park.

Later in the year, he held a huge rally in Philadelphia, where he was welcomed by the mayor at Independence Hall. He also visited smaller towns and cities across the United States, and his trip garnered huge press coverage – an invaluable boon for his campaign to heighten awareness of the Irish issue in America.

But difficulties soon emerged during his visit. De Valera became embroiled in a bitter split among Irish-Americans. He found himself at odds with Judge Daniel Cohalan and John Devoy, central figures in the Friends of Irish Freedom association.

Part of the dispute centred around money. De Valera had settled on an idea for a bond sale as a way of raising money for the cause – investors would be given bond certificates that would be exchangeable for bonds of the Irish Republic once it got international recognition. But Cohalan and Devoy – who had already raised thousands through the Friends of Irish Freedom group – were opposed, concerned about the scheme’s legality for one.

De Valera’s claim in an interview that Irish-British relations could be analogous to the relationship between Cuba and America also enraged the Cohalan-Devoy camp, who accused him of surrendering the idea of full Irish sovereignty.

De Valera’s increasingly acrimonious relationship with Cohalan and Devoy spilled over into the 1920 Republican and Democratic conventions.

Against the advice of Cohalan and Devoy, de Valera advanced a resolution about Irish independence which was rejected 12-1 at the Republican convention in June that year. A rival resolution by Cohalan squeezed through but ultimately was overturned.

Similarly, he failed to secure the inclusion of the Irish issue in the Democratic Party’s policy platform during the Democrats’ convention in San Francisco.

De Valera left the United States in December 1920 with mixed results. Though he had raised millions of dollars through the bond sale, he had made little progress in co-opting official America to Ireland’s cause. Much as division was to characterise the next chapter of his political career in Ireland, de Valera’s sojourn in America was to leave Irish-America more divided than it had ever been.