Congo orders internet and SMS cut ahead of demonstrations 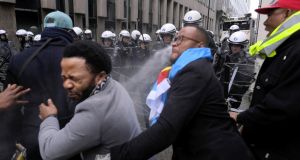 Members of Congolese associations calling Joseph Kabila to step down as President of the Democratic Republic of Congo, clash with police officers during a demonstration on December 30th, 2017 in Brussels. Photograph: NICOLAS MAETERLINCK/AFP/Getty Images

Democratic Republic of Congo’s government on Saturday ordered telecommunications providers to cut internet and SMS services across the country ahead of planned anti-government demonstrations.

Grassroots Catholic activists have called for marches in major cities on Sunday to demand that President Joseph Kabila commit to not changing the constitution to stand for a third term and release political prisoners. Kabila was required by the constitution to step down in December last year when his mandate expired but an election to replace him has been repeatedly delayed and is now scheduled for December 2018.

Security forces killed dozens of protesters during anti-Kabila demonstrations last year, and deteriorating security has led to fears of renewed civil strife in Congo, where millions of people died in civil wars around the turn of the century.

“It is for reasons of state security,” telecommunications minister Emery Okundji told Reuters. “In response to violence that is being prepared ... the government has the duty to take all measures to protect Congolese lives.”

Okundji wrote a letter to telecoms providers ordering them to suspend internet and SMS services by 6pm in the capital Kinshasa until further instruction, although some users still had access more than two hours later.

Congolese authorities have banned Sunday’s demonstrations, which have been backed by most opposition leaders, and warned that all gatherings of more than five people will be dispersed. A series of appeals by opposition leaders for protests this year have been easily suppressed by security forces but the Catholic activists’ call has managed to unite nearly all of Congo’s fractious opposition.

Some 40 per cent of Congo’s population is Catholic and the church enjoys rare credibility with the public, even though its leadership has not formally backed Sunday’s protests.

On December 31st last year, Kabila’s ruling majority and opposition leaders struck a deal that allowed Kabila to stay in power beyond the end of his mandate but required that the election to replace him be held by the end of 2017. The country’s electoral commission, however, later said that was not possible and scheduled the vote for December 23rd, 2018.

Congo’s government also cut internet and SMS service during anti-government demonstrations in January 2015 and more recently ordered limits to certain social media access, one of more than a dozen African governments to have done so in the past two years. – Reuters