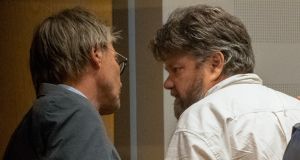 Public prosecutor Jonas Arvidsson (left) speaks to Carl Beech in Gothenburg District Court after he was remanded for extradition back to the UK in October 2018. Photograph: David Rose/Getty Images

A former nurse who ruined the reputations of high-profile figures by lying to detectives about the existence of a murderous VIP paedophile ring has been jailed for 18 years for his “cruel and callous” behaviour.

Carl Beech (51) told the Metropolitan Police repeated falsehoods, making hours worth of tearful interviews in which he said he had been sadistically abused by famous faces from the worlds of politics, the armed forces and security services.

His allegations, which included claims he had been taken out of lessons during the 1970s and 1980s to be abused and that he had witnessed three children murdered at the hands of the invented VIP ring, prompted the force to launch the Operation Midland inquiry, which ran from 2014 to 2016 at a cost of £2 million and eventually closed without a single arrest being made.

Former Tory MP Harvey Proctor was one of three of the men accused by Beech, known as “Nick” during the investigation, to have their homes raided in the probe, and has since described the investigation as a “truly disgraceful chapter in the history of British policing”.

Following a two-month trial at Newcastle Crown Court, Beech, a divorced father of one from Gloucester, was convicted on Monday of 12 counts of perverting the course of justice and one of fraud.

Sentencing him to 18 years in prison on Friday, Mr Justice James Goss, told Beech: “Between December 2012 and March 2016 you deliberately, repeatedly and maliciously told lies to the police.

“You falsely accused a number of well-known public figures including politicians, very senior military figures and the heads of the intelligence services, many of whom had since died but some were still alive, of having been members of paedophile groups and the perpetrators.

“The distress, anger and loss caused to the individuals you accused and their families, some of whom died during the process, has been immense.”

Discussing the police, he said: “No doubt you were encouraged by their apparent willingness at that time to accept the truthfulness of your account.”

Beech, once a well-achieving figure within the health services, showed no reaction as he was taken down from the dock after hearing the length of his jail term.

The judge said that, as a result of Beech’s allegations, a “dark cloud of suspicion” had hung over those he falsely accused, as well as their families.

Among Beech’s stories were claims that his stepfather, an army major, raped him and passed him on to generals to be tortured and sadistically abused at military bases by other establishment figures.

Also wrongly accused by Beech were Normandy veteran Field Marshal Lord Bramall, then 91, and the late Lord Brittan, both of whom also had their homes searched in Operation Midland.

In a victim-impact statement that was read in court, Mr Proctor said he had only a “feeling of icy contempt” for Beech, and that his lies had caused “ordinary people to revile and despise me”.

Meanwhile, Lord Bramall, now 95, said: “In service of my queen and country, I have done all that has been required of me.

“I can honestly say, however, I was never as badly wounded in all my time in the military as I was by the allegations made by ‘Nick’ that formed the basis of Operation Midland.”

Diana Brittan, the wife of Lord Brittan, said that the investigation into her husband meant that he was “denied the dignified death that he deserved”.

Discussing how Beech had made a claim through the Criminal Injuries Compensation Authority for £22,000, which was used to put a deposit down on a Ford Mustang, the judge said: “I’m quite satisfied that you are an intelligent, resourceful, manipulative and devious person.”

E-fit image Mr Justice Goss said it was a “further particularly cruel and callous aspect” of Beech’s behaviour that he provided police with an e-fit image of a boy who he falsely said had been murdered whose appearance matched that of Martin Allen, who disappeared in 1979 aged 15.

The judge said this had given false hope to the boy’s family.

Prosecutor Tony Badenoch QC had previously explained to the jury how Beech had showed “breathtaking hypocrisy” in accusing others of sex offences against children while he himself demonstrated an interest in pre-teen boys.

After Operation Midland was closed, Beech fled to Sweden at a time when the Crown Prosecution Service were considering whether to bring charges against him, buying two properties there and trying to evade justice by using false identities.

He was extradited back to the UK to face charges in October last year. – PA