President Michael D Higgins and Taoiseach Enda Kenny attend the British embassy in Dublin to sign a book of condolence for the victims of the recent attack on Westminster. Video: Ronan McGreevy 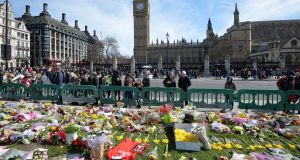 British parliamentarians have said the “soft” outer ring of security at the Palace of Westminster must be enhanced after a video showed the complex’s gates were left open and apparently unmanned after Wednesday’s terror attack, which left five people dead.

The footage, captured by The London Times, shows the aftermath of the assault on New Palace Yard which left police officer Keith Palmer fatally wounded.

Mr Palmer was knifed by the attacker, Khalid Masood, after the terrorist drove a car at pedestrians on Westminster Bridge before storming the parliamentary estate armed with two knives.

He was then shot dead by police.

As armed officers swarm the cobbled forecourt after killing Masood, the footage shows that the iron gate which allows vehicles to enter parliament was apparently left wide open.

No police officers are visibly guarding the entry point, known as Carriage Gates, fuelling concern that the attack might have been worse had Masood been followed by accomplices.

Pedestrians are shown walking past and at one stage a courier on a moped appears to enter unchallenged.

Separate footage had shown British prime minister Theresa May being rushed from the building and into a waiting car just yards away.

Former Metropolitan police commissioner Lord Ian Blair and ex-House of Commons deputy speaker Nigel Evans have both said security will now have to be stepped up.

Meanwhile, fears Khalid Masood was groomed for extremism in prison have heightened after it was claimed he turned to Islam while behind bars.

Counter-terrorism officers have spent days piecing together what led the 52-year-old to commit Wednesday’s assault in London.

Only two men - a 27-year-old and 58-year-old arrested in Birmingham - remain in custody after a hunt for accomplices saw 11 people detained in raids across England.

It remains unclear whether the assault was carried out alone or with support.

The Saudi Arabian embassy in London said Masood worked in the country for several years, raising the possibility he was radicalised overseas.

A childhood friend of the man who was known then as Adrian Elms told The Sun newspaper that Masood first emerged as a Muslim after serving a jail sentence.

Mark Ashdown (52) said: “When he first came out, he told me he’d become a Muslim in prison and I thought he was joking.

“Then I saw he was quieter and much more serious.

“I gave him some cash-in-hand work for a few months as a labourer.

“He said he needed time to pray and read the Koran - something about finding inner peace.

“There were still flashes of the old Ade, but they were few and far between.

“I heard he’d split from his partner and got even more deeply into religion. But nothing could have prepared me for hearing his name on the radio.”

Masood’s conversion will fuel concerns about the rising threat of criminals being brought under the influence of hardened jihadists while in prison.

British ministers have announced plans to create specialist units within jails to tackle what a government-ordered review last year concluded was a “growing problem”.

The Saudi embassy said Masood lived in the country between November 2005 and 2006 and between April 2008 and April 2009, during which time he worked as an English teacher on a work visa.

He travelled to the country again for five days in March 2015.

It said in a statement: “During his time in Saudi Arabia, Khalid Masood did not appear on the security services’ radar and does not have a criminal record in the kingdom of Saudi Arabia.”

Details of Masood’s history of criminality have continued to come to light, suggesting a propensity for violence which laid the groundwork for his armed rampage on Wednesday.

Masood was born in Kent, but moved across the country and used a variety of aliases, including Adrian Russell Ajao.

Scotland Yard’s head of counter-terrorism, Mark Rowley, said detectives want to understand his “motivation, preparation and associates” and if he “either acted totally alone, inspired by terrorist propaganda, or if others have encouraged, supported or directed him”.

Detectives have seized 2,700 items from the searches, including “massive amounts” of computer data, while about 3,500 witnesses have been spoken to.

Searches at three addresses are continuing.

Mr Rowley said: “We remain keen to hear from anyone who knew Khalid Masood well, understands who his associates were, and can provide us with information about places he has recently visited.

“There might well be people out there who did have concerns about Masood but weren’t sure or didn’t feel comfortable for whatever reason in passing information to us.”

Masood was known to police and MI5 but was a “peripheral figure” who was not implicated in any current inquiry.

He had convictions for assaults, including grievous bodily harm, as well as possession of offensive weapons and public order offences.

Hero MP Tobias Ellwood, who tried to save Mr Palmer’s life, and security minister Ben Wallace have been appointed to the Privy Council for their roles in responding to the atrocity.

Masood’s victims on the bridge included US tourist Kurt Cochran and his wife Melissa, from Utah, who were on the last day of a trip celebrating their 25th wedding anniversary. Mr Cochran was killed and Ms Cochran was badly injured.

She is believed to be a 43-year-old mother-of-two.

Leslie Rhodes, a retired window cleaner from Clapham, south London, died from injuries sustained in the attack. He was described by neighbours as a “lovely man”.

Two people remain in hospital in a critical condition, one with life-threatening injuries.

Police officer Kristofer Aves and another member of the force hurt in the attack are also in hospital with “significant injuries”.

Police said armed patrols would take place at Wembley Stadium and extra officers would be on the ground when England played a World Cup qualifier against Lithuania on Sunday.

There will also be a minute’s silence before the 5pm kick-off.