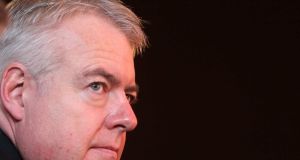 First minister for Wales Carwyn Jones: “Ministers in London have yet to show us any evidence of the benefits of leaving the single market and the customs union.” Photograph: Sam Boal/Photocall Ireland

The Welsh government has urged Theresa May to think again about taking Britain out of the single market and the customs union, warning that Wales would be disproportionately affected by the economic downside of a hard Brexit.

Launching a report on Welsh trade after Brexit on Friday, first minister Carwyn Jones said moving to World Trade Organisation rules and the imposition of tariffs could have a catastrophic impact on Welsh lamb and shellfish exports as well as manufacturing sectors.

“These hard facts underline what is at stake if the UK government fails to get the right deal for the UK or we crash out of the EU without one. I fundamentally disagree with the prime minister’s well-worn phrase that “no deal is better than a bad deal” and believe that leaving the single market and the customs unions would be hugely damaging for Welsh businesses and jobs, with our agricultural, food producers and automotive sectors being particularly hard-hit,” he said.

“Ministers in London have yet to show us any evidence of the benefits of leaving the single market and the customs union or how new trade deals would replace the benefits of access to the EU. In fact, UK government documents that have come to light this week chime with our own analysis of a post-Brexit economy.”

A majority in Wales, as in England, voted in the 2016 referendum to leave the EU, while majorities in Scotland and Northern Ireland voted to remain. But as the Welsh government report points out, 61 per cent of Welsh exported goods go to the EU, compared to 49 per cent of goods from the whole UK.

The report expresses concern about the possible impact of Brexit on Welsh ports such as Holyhead, which are located in deprived parts of the country. And it warns that a frictionless border in Ireland should not come at the expense of Welsh ports.

“The Welsh government is fully supportive of a soft border, but we cannot support any outcome which has the potential to stimulate traffic away from the ports of Holyhead, Fishguard and Pembroke Dock in favour of another part of the UK.”