The Irish woman who became a leading Brexiteer

Interview: UK-based broadcaster Laura Perrins is on a crusade against ‘PC culture’ 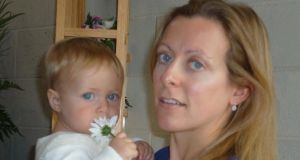 Conservative woman: Laura Perrins in 2013, the year she came to prominence for challenging Nick Clegg, who was the UK’s deputy prime minister at the time, on child-benefit cuts.

Laura Perrins says she was probably a conservative before she knew what the word meant. The prominent 37-year-old Brexiteer, who is originally from Balbriggan, in north Co Dublin, champions a smaller state, opposes same-sex marriage and abortion and, of course, strongly supports the United Kingdom’s departure from the European Union.

Perrins, who is based in London, was a criminal barrister before giving up her job to raise her children; she now voices her views via the Conservative Woman website, which she coedits, as well as in newspaper columns and on radio and television.

She rose to prominence in 2013, after the British government cut child benefit and introduced childcare payments. She saw it as discrimination and confronted Nick Clegg, who was deputy prime minister, and Liberal Democrats leader, at the time, on his weekly radio show, accusing him of viewing her as doing a “worthless job”.

The following year she launched the Conservative Woman with Kathy Gyngell, a like-minded policy researcher. Targets include feminists, “lefties”, the BBC and, on occasion, the Conservative Party itself. Perrins sees the United Kingdom as a country where the family has been undermined and opposes what she describes as a politically correct culture. She describes feminist “piffle” as “destructive nonsense”.

Perrins says the website has found a gap for a “Marmite” strand of thinking, which is to say one that is either loved or hated.

“There are plenty of conservative websites out there that cater for the middle, so we just say what we honestly believe, and people are free to accept or reject that as they wish.”

Perrins is frequently compared to Katie Hopkins, the provocative columnist whose articles for Mail Online led to several libel cases (and who, when her contract was not renewed at the end of last year, moved to a Canadian right-wing website). “I get the Katie Hopkins name thrown at me, as do other conservative [women] commentators. You can only be Katie Hopkins, or that is it. That to me is a classic form of sexism. I don’t normally play that card, but it is.

Although Perrins says that her brand of conservatism does not identify with the new US nationalism, she calls Donald Trump an interesting character who has highlighted an irresponsible media.

“Trump is what happens if you ignore your working class for long enough. Trump is what you get. I think he was needed in order to stop America collapsing completely and utterly into leftism. Most of all . . . he has exposed the media for the complete and utter frauds that they are.”

Perrins says Brexit will take time. She is not, she says, as puritanal as other leavers. For Ireland, the Border issue has been overplayed, she says; the UK’s departure from the EU will not harm or threaten the Republic.

“It just comes down to representative democracy and going back to basic conservatism. We should be able to kick out the people that make the rules. A lot of the rules are now made from Brussels. You can’t kick them out. It is not transparent enough. It is not accountable enough. On balance, I think that is enough to leave.”

Perrins, who has lived in London for 14 years, makes no claims to be part of the Irish community in the city, but she returns to Ireland regularly to see family.

She believes Ireland remains socially conservative, despite evidence of shifting social norms, such as the 2015 referendum vote in favour of marriage equality, which she opposed.

This year’s planned referendum on abortion could result in a sharp cultural change in Ireland, she says, should it result in the loosening of laws around terminations.

“In some cases this will mean that Irish children are being aborted in Irish hospitals, so although you can say, ‘It is not something I would do myself, but if other people want to do it, that is their decision,’ . . . to me you are not saying it is their body, their choice. You are saying it is your baby, your problem: you deal with it yourself.”